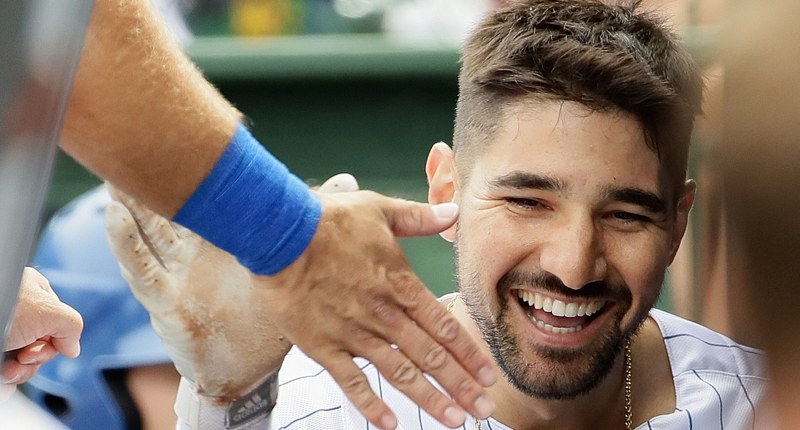 Credit Nick Castellanos with the title up there, as the new Cubs outfielder, already known for his next-level thinking, takes that simple philosophy with him to the plate. Every day is Opening Day. Big in the box. Kick high. Swing hard. Run fast.

Oh, and spike your bat when you are jacked up because it gets your teammates and everyone else jacked up, too.

Castellanos’s two homers yesterday gave him 11 for the month of August, his first month with the Cubs, and the same total he collected through the first FOUR months of the season with the Tigers.

Enjoy this stretch, Cubs fans, and the energy Castellanos is bringing to the team. It’s rare, it’s effervescent, and it’s unlikely to last forever. Savor the moments when the sport gives ’em to you.

Nicholas on his bat slam after 2nd homer. pic.twitter.com/tO7ZL40v2g

Chase Anderson on the Nick Castellanos bat slam: “You make better pitchers and you get them out, they don’t do that stuff.” pic.twitter.com/gjH7xvfmnz

Does Nicholas Castellanos consider himself a home run hitter?

"I don't consider myself anything other than just somebody who loves to hit – kick high, swing hard, ya know?"

"What he's been doing is really impressive for the top of our lineup. A lot of energy. When I see him up in the box, you feel like really good things are going to happen."

Nicholas Castellanos! With 2 HR today, he now has 11 HR in August, the most by a @Cubs player in his first calendar month with the team in franchise history.

Only Justin Upton (12 HR in April 2013 with the Braves) has ever hit more in his 1st month with a team. h/t @EliasSports pic.twitter.com/BtaznWqlLB

I haven’t seen this Nick since playing high school baseball with all of our lifelong friends. Seriously

Clearly the Cubs have the best player in baseball. pic.twitter.com/PeBvQc0kCo

Have I told you lately that you're awesome? https://t.co/H1hIg34Y0J pic.twitter.com/6LYPZah52Y