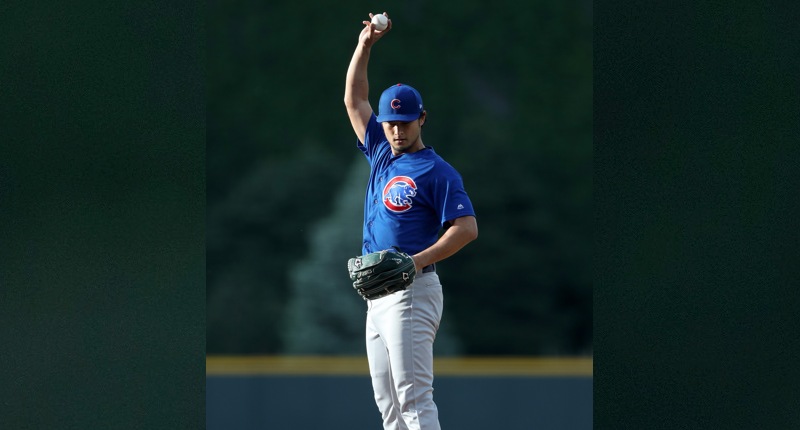 To be sure up front, I have no doubt the headline is true there – it’s just that it jars you to hear it only now, after Yu Darvish is dealing with a physical issue.

So, to set things up, Darvish has been on a dominant run over the last few months, striking out guys and not walking them at a literal historic pace, picking up new pitches on the fly, and frequently looking like the ace we always hoped he could be with the Cubs.

But he’s apparently been doing it over the past month with forearm tightness that he’s managed start to start. After his last one, though, with the tightness not quite abating by the day before his scheduled start on Sunday, the Cubs decided to scratch him in favor of Tyler Chatwood, saying that they were confident Darvish would make his next start on Saturday against the Brewers.

That may well still happen, though Darvish himself declined yesterday to talk about his forearm.

The new wrinkle to the story? This isn’t just about the forearm, but is also about a plan to manage Darvish’s innings after a short season in 2018 … ? That really does completely make sense, but it’s hard for it not to stand out as an eyebrow raiser when we’ve heard nothing about it until now, after he is scratched with a forearm issue:

"It is something in the back of our mind all year."

Darvish has climbed north of 150 innings after logging 40 last year. Skipping a start helps Cubs as they monitor his workload. On that and more in today's notes: https://t.co/V0lqu5AxqD via @MLB

The Cubs expect Yu Darvish to start Saturday but are mindful of his increased workload this season.

To be sure, the Cubs are framing this skipped start as more of an added benefit, rather than a plan.

Darvish threw just 40.0 innings last year thanks to the stress reaction in his elbow, and I completely do believe the Cubs were concerned about a huge jump after Darvish did just that with the Rangers/Dodgers in 2016 (barely 100 innings) and 2017 (over 200 innings).

“It is something in the back of our mind all year,” pitching coach Tommy Hottovy added. “So, yes, the added benefit of this is, he’s not feeling great right now, but it’s a way to give him a rest, save some of those innings and be able to monitor things going forward. We’re in September now, too, so we have a lot of arms. We can see where he’s at in certain games.”

With the Cubs hoping to make a deep postseason run, the innings meter on Darvish could run up quickly, with the toll exacting itself at the most critical point of the year. So, sure, give him a little extra rest. I guess I just wish it wasn’t coupled with concerns about a forearm issue.

Here’s hoping Darvish really does make that start on Saturday.