Trying to Hammer Home Just How Good Kyle Schwarber Has Been ... Skip to content 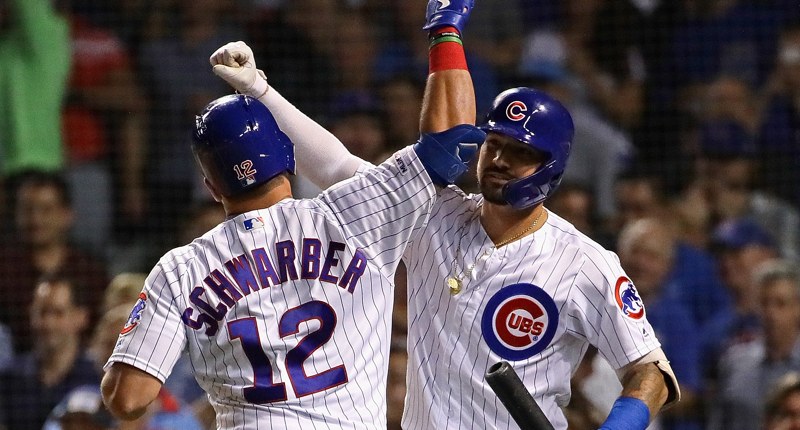 Ask any Cubs fan Who’s leading the offense right now? and they’ll probably respond, correctly, with Nick Castellanos (well, some will probably say some non-Castellanos person, but I can only do so much for those who don’t want to be helped).

In fact, one other member of the Cubs has been pretty darn good since August 1st, and you might be surprised to see just how good he’s actually been.

Welcome to the party, Kyle Schwarber!

Since the Cubs acquired him, Nick Castellanos has been the best hitter on the team.

But what if I told you I could add "just barely" to the end of that … pic.twitter.com/A9zpwkeCpY

Over his last 102 plate appearances, Kyle Schwarber is slashing .287/.392/.678 which is good for a 168 wRC+ (68% better than the league average hitter and 18th best in MLB during that stretch). And while Castellanos has certainly gotten the better results and most of the glory, the two are basically neck and neck (in fact, in many ways, Schwarber has a more solid foundation with 3x as many walks and roughly the same amount of strikeouts, but we’re not here to compare them – they’ve both been great and I’m just happy it’s happening).

As for why it’s happening: I’m not going to hit you over the head with all of the peripherals again today – we just did that a week ago – but if you’re interested in understanding the nuts and bolts behind Schwarber’s resurgence, I suggest starting where we left off last week (pretty much everything still holds true):

I wrote about Schwarber and his massive, sweeping, sustainable changes to his approach and results at the plate.

With all of that out of the way, let’s get to the part where we cut his season off on favorable dates to make his numbers look really, really good (it doesn’t hurt that he went 3-3, 2B, HR, BB last night).

For the season as a whole, the Cubs left fielder is slashing .236/.329/.515 (112 wRC+) with 33 home runs and 77 RBI. And while that is perfectly acceptable right there on the surface, Schwarber pretty clearly turned a corner around the mid-way point of the season.

In fact, this is a pretty fantastic Twitter thread to discover exactly that:

To summarize: The thread shows how Schwarber has been a more productive offensive force since July 1st than guys like Paul Goldschmidt, Gleyber Torres, Aaron Judge, Gary Sanchez, Nolan Arenado, and Max Muncy – none of whom, by the way, have actually been bad!

But I promised some cutoffs (you can use these bolded headlines against your Schwarber-hating friends at the bar this weekend – no extra charge), so let’s do it.

But my favorite number from this prolonged period of excellence is pretty simple: .327 ISO. Kyle Schwarber’s isolated power over his last 300 plate appearances is behind only 5 players in all of MLB – you may have heard of some of them:

And herein lies why it’s so easy to dream on Schwarber’s upside. His power is *elite*. If he can find a way to improve the rest of his game (as he seemingly has), he will instantly become one of the best hitters in baseball.

Strictly speaking, that 153 wRC+ should be the thing to stick out, but I know most of us will be attracted to the .263 batting average. That may not win Schwarber a batting title any time soon, but a .263 batting average is well within the range that’ll appease most traditionalists – and he’s doing that with a ridiculously low (even for him) .223 BABIP (in other words, he should probably have an even higher average).

But here’s where thing get absolutely bonkers. Remember that .327 ISO from the last period? Well, in this stretch, Schwarber’s isolated power number is up to .394 – second best in all of MLB during that stretch. And the crazy part is that’s not even the crazy part.

Despite being the second-best power hitter in baseball for over a month and a half now, Kyle Schwarber’s strikeout rate during that period is down to 17.8%!

I could go on and use more random cutoffs to continue proving this point, but if that doesn’t do it for you, I don’t know what will. Kyle Schwarber is in the middle of an absolutely brilliant stretch of baseball – results and otherwise – and it’s been an eye-popping pleasure to watch.

If this is the guy he is from now on, the Cubs have to hold onto him and stick him in the middle of their lineup every day of the week.