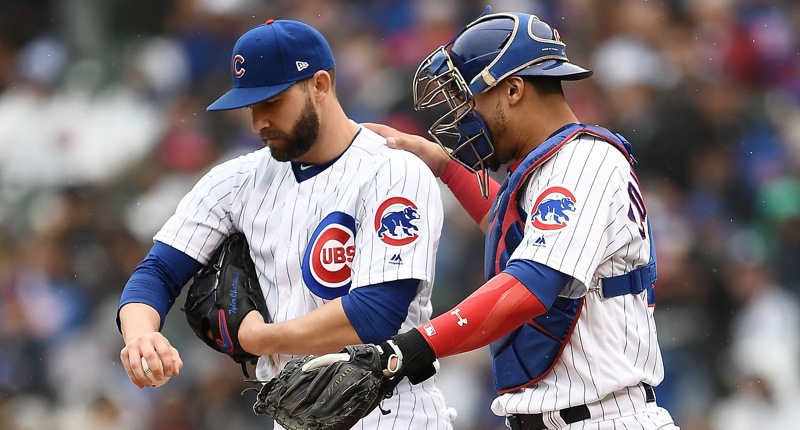 When the Cubs had the need for a last-minute fill-in to start because of a shuffled schedule early this year, Tyler Chatwood got the call over Mike Montgomery or any of the possible AAA call-ups. It was a nod to the work that he had purportedly done to get himself back to where he needed to be, mechanically, over the offseason.

And it paid off, as Chatwood wound up going 6.0 scoreless innings against the Diamondbacks. By game score, he had just ONE better start in all of 2018, his first season with the Cubs. It was a very nice day.

Since then, Chatwood has served in that role, bouncing around between multi-inning reliever and late-inning option and emergency fill-in starter. To be sure, it’s not an easy role to fill, but it’s awfully important in an era where teams are very cautious with starting pitchers, and aggressive with the bullpens. Having a guy like Chatwood in your back pocket – much in the way Montgomery functioned in the years before – is huge.

Chatwood is better this year in virtually every way except home run rate (which, hey, who among us in 2019 baseball). And the things he did well last year, primarily in contact management, he’s still doing well.

Chatwood’s 4.14 ERA this year has been considerably better than the league’s 4.44 mark. By ERA-, his is about 6% better than league average, no small feat when you have no consistent role, and are asked to do a variety of things with no notice. Heck, even if he were slightly below league average in that role, it would be very valuable.

The Cubs are fortunate to have the 29-year-old righty, including for next year. I know we’ve said it all year, but man, who would have seen that coming after an offseason of constant hypothesizing (*guilty*) about how the Cubs might dump his contract to save a few pennies?

For his part, Chatwood is still hoping to be a starter next year, the final of his three-year contract with the Cubs.

“Yeah, I hope so,” Chatwood told Patrick Mooney when asked about being a starter again next year. “Obviously, last year didn’t go the way I wanted. But I think I’ve shown that I’m back to myself this year. Hopefully, I get that chance. That’s my goal. That’s what I feel like I still am.”

With Cole Hamels a free agent, the Cubs do have an opening available in the rotation next year, though that’s all in a theoretical sense. Even if the Cubs decided to proceed without adding another starting pitcher externally (or retaining Hamels), Chatwood would be competing with, among others, Adbert Alzolay and Kendall Graveman for that 5th starter job. But it’s incredible to know that, if he isn’t traded (for actual value!), Chatwood is a legitimate candidate to compete for the 5th starter job, or step into it if there is a spring injury.

And, if that doesn’t happen for him, there’s now a year’s worth of evidence that he can fill the swing role as well as any alternative the Cubs would have available. That’s worth his one year and $13 million remaining.

Mooney’s piece has much more on Chatwood’s work, how he and the pitching group got together to turn him around, and how he could be used even more aggressively as a weapon next year if things keep progressing:

How Tyler Chatwood recovered from a lost year in Chicago and now sees his future with the Cubs: https://t.co/6mmykxBV1A