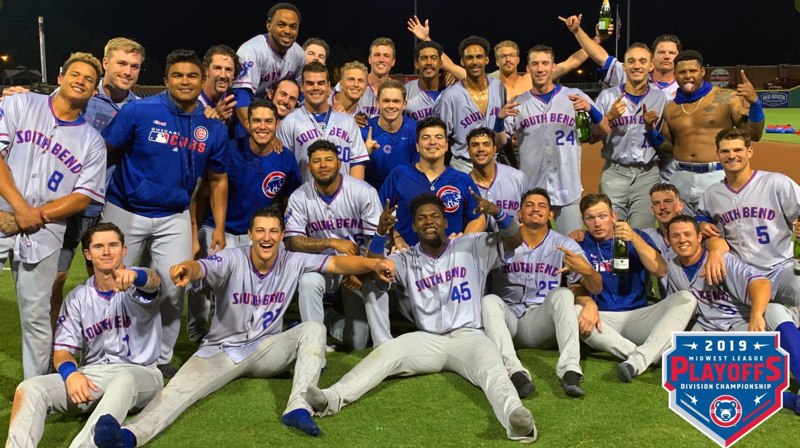 Thursday brought more late innings excitement for the two Cubs affiliates in the minor league playoffs. South Bend used a big ninth-inning rally to come back to win 7-4, while Iowa couldn’t hold onto an early lead, and lost 4-3  in 10 innings.

For South Bend, it meant a series win, and moving on to the Division Series:

ICYMI: Watch the final out and #SBCubs advance to the Midwest League Division Championship. Video courtesy of @BGHotRods.#CubsWin #FlyTheW pic.twitter.com/BCYK3D3EXV

South Bend had one of those games where they kept mounting comebacks, and kept giving away the lead. It happened in the fourth and fifth innings, and the score was deadlocked at 4-3 Bowling Green until the ninth. Riley Thompson had some bad luck from the BABIP gods, with nine batters reaching base among the 18 that put the ball in play.

But the bullpen came in, and things stabilized. Brandon Hughes, converted to left-handed relief after spending last year with South Bend as an outfielder, relieved Thompson with one out in the fifth inning. Then, this happened:

Hughes was solid, pitching at 90-91 with a loopy 78-81 mph breaking ball. He gave way to Brendan King, who pitched three scoreless innings in what would eventually turn into the win.

But the highlights came in the ninth inning, when Andy Weber hit a one out double on a 96 mph fastball, followed by a Brennen Davis bloop single on the same pitch. Nelson Maldonado had a swinging bunt turn into two bases when the pitcher threw the ball into right field. Bowling Green would commit an error with the next batter, Jake Slaughter, when an attempt at a 1-6-3 double play resulted in zero outs. Cole Roederer had a great piece of hitting knocking a 97 mph low-and-away fastball back up the middle on a soft liner, Fidel Mejia would walk with the bases loaded, and the damage was done.

The star of the game was Brennen Davis, who went 3-for-4 with a walk and two doubles. A look at his five PA:

First PA: Takes a 1-1 85 mph slider that doesn’t slide much and hits it off the right field wall.

Third PA: Lines a 88 mph middle-up fastball off the absolute top of the RF wall

Fourth PA: Strikes out on 4 pitches: 2 sliders away, 97 mph on hands, slider away

Fifth PA: Muscles 96 mph low and away to right field for a single

For Iowa, the early story of the game was Tyson Miller putting together his best start in an Iowa Cub uniform. After getting out of a bases loaded, one out jam in the second inning, Miller cruised through innings 3-6, facing just one batter over the minimum in that time frame.

Miller entered the seventh inning with this line: 6 IP, 4 H, 1 ER, 2 BB, 4 K, 88 pitches. Now, there’s something you have to know about Tyson: he’s had a bit of trouble finishing outings at the very end this year. Especially since getting the bump to Iowa, where he’s thrown 95 pitches or more five times, after reaching that threshold just four times in his career prior.

I crunched the numbers on Miller after 80 pitches this year, and it’s not pretty. Note this might have a mistake or two in there, but the results are rough: .352 AVG / .453 OBP / .556 SLG in 64 PA after 80 pitches in 2019. Whether Miller needs to work on his endurance, his gameplan the third time through the order, or further sharpening his third and fourth pitches, his upside as a Major League starter is dependent on turning this around. In the first 80 pitches, hitters posted a mere .241 average and .407 slugging.

However, with six great innings pitched, and 88 pitches thrown, Iowa manager Marty Pevey probably should have closed the book on Miller and turned the 3-1 lead to his bullpen. Instead, he gave Miller the seventh, which started with a walk and a double. Then Randy Rosario was summoned, and soon after, the game was tied. The game stayed deadlocked until the tenth, when Jordan Minch really struggled in his second Triple-A appearance, allowing two walks and a walk-off single. It was the second straight extra-inning walk-off loss for the I-Cubs. Ouch.

Iowa heads back home down 2-0 in a best-of-five series, with two games they very surely could have captured. Meanwhile, South Bend moves to the second round of the Midwest League playoffs, where they will play another best-of-three series against the winner of the Lake County – Great Lakes series.