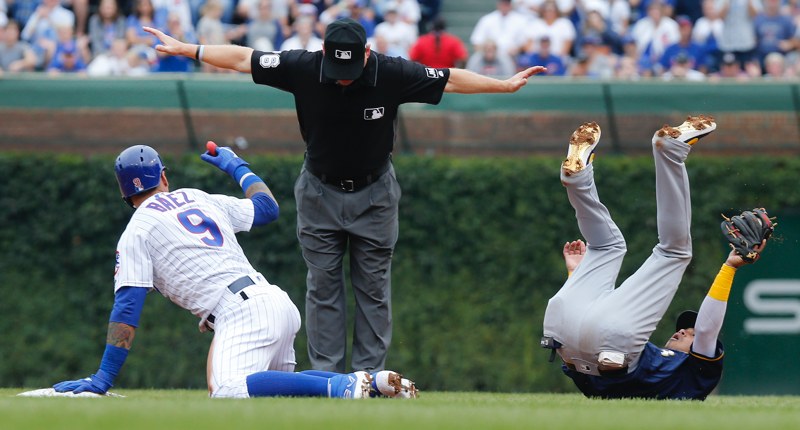 Some pre-game injury updates on two of the Cubs’ important pitchers, and a very important shortstop. Craig Kimbrel is on the IL with elbow inflammation, Yu Darvish had his last start skipped due to ongoing forearm tightness, and Javy Baez has missed the last several games with a jammed thumb.

Will start with Baez, because the update on his situation is the most concerning: he’s getting an MRI on his jammed thumb.

Since he did not get an MRI originally, and since he was going to be in the lineup yesterday until feeling too much discomfort to go and was a late scratch, that means the injury may have been worse than originally believed, and has not gotten better at a pace that was expected. That’s all … bad. It doesn’t mean he’s got a serious injury in there, but it does mean, at a minimum, he’s still hurting.

That means, he’s going to miss more time no matter what:

Baez to have an MRI on his thumb tomorrow just to be sure it’s not something serious. Won’t play Saturday either way

#Cubs Baez will have an MRI on his hand tomorrow. Maddon says they want to know what they're dealing with

Gulp. I guess we’ll see what we see.

The latest on Darvish, who apparently initially felt his forearm tightness much longer ago than we first thought:

Yu Darvish said he first felt tightness in forearm back on July 3 vs. Pirates. Has been able to manage it. Says he’s good to go for Saturday start here in Milwaukee.

Darvish said he first felt discomfort on two-seam pitch to Colin Moran on July 3. He’s been pulled early from starts to protect against severe injury. Remains on schedule for Saturday

That explains why he was so consistently getting pulled from games “early” when it seemed like he was cruising. Also, that pitch was a 99 mph two-seamer(!), and the at bat ultimately finished in a strikeout. Darvish got a few more outs in that one, too.

Here’s how he looked as he spoke:, if you want to watch at ESPN. Looks undisturbed.

As for Kimbrel, he offered a little more information on his elbow injury, and stuck with the hopeful/encouraged/we’ll see type language:

Kimbrel: Elbow wasn't an issue for him before Sunday. He's not concerned and remains hopeful he will return when first eligible next Thursday.

He/Cubs have a plan for when he will pick up a ball and throw again, but "I think we'll keep that to us for now."

Cubs closer Craig Kimbrel said he’s hoping to be ready for activation when eligible on Thursday. Doesn’t believe the elbow issue is serious. Was encouraged by MRI results. pic.twitter.com/ADj2TFScR7