It's Only Two Games, But Whatever: Ben Zobrist Has Been Exactly What This Team Needed Skip to content 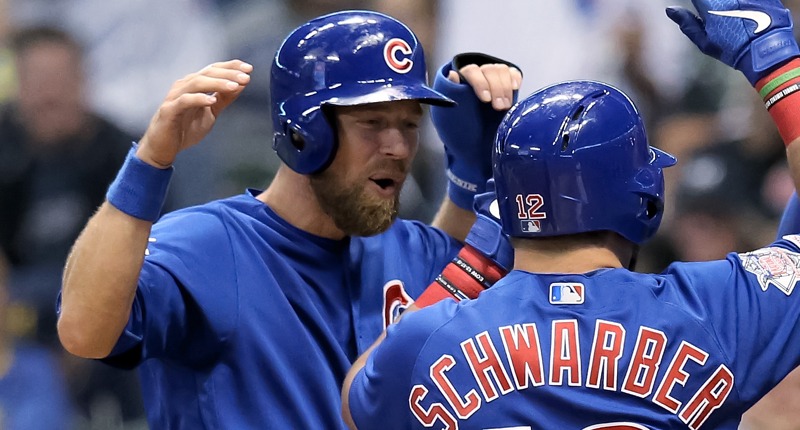 When we were discussing the potential impact of a Ben Zobrist return back in August, I was never convinced that this actual on-field contributions could live up to whatever he’d provide in the clubhouse as a leader and a generally positive presence (which was something the Cubs desperately needed anyway).

How could a guy, age 38, come back from that kind of absence, and immediately contribute offensively in a way no one else has been able to at the top of the order? Expecting it was just not realistic, and thus, I expected something closer to the opposite.

Obviously we’re talking about just two games here – a sample so small, it’s unfair to even call it a sample – but Zobrist has kind of been an extreme version of himself since returning from the restricted list, with four hits (all singles, including a pretty great bunt), three walks, and five runs scored.

I mean, the guy reached base all five times against the Brewers last night. What more can you ask for out of a leadoff hitter:

Ben Zobrist is the first #Cubs leadoff hitter to reach 5 times in a game since Zobrist did it September 13, 2017 (2 hits, 3 walks)

But Zobrist’s value wasn’t apparent only last night, and it isn’t just in his times on base.

Zobrist has been extremely competitive at the plate from start to finish in both games he’s started since returning from the restricted list, which, aside from how many times he’s wound up on base, has plenty of value in its own right:

The only two times Zobrist has gotten out, he’s gobbled up six pitches in each AB. And the only times he’s seen fewer than four pitches in a single at-bat, he’s gotten on base (2 singles). When you perform that way consistently, you’re helping your team in so many more ways than your presence on the bases (seeing more pitches can, among other things (1) tire out an opposing starter, making him more susceptible to mistakes, (2) allow your teammates to see more of his offerings/velocity/stuff before their own at-bat, and (3) force the opposing team into their bullpen sooner than later).

And Zobrist seems to get that.

“That’s the kind of thing that you feel good about,” Zobrist said after the game, per Cubs.com. “Just setting the table for those guys coming up behind me. They’ve been hitting the ball really well. … It’s just nice to know that the pressure’s not on. I just focus on finding a way to get on base.”

I don’t really expect Zobrist to hit for much power over these last 20-something games – I just don’t think there’s enough time left for him to get his swing exactly right (let alone for us to discover how much pop he actually has left in there) – but boy am I not sure that even matters. So long as he keeps bringing his A+ approach to the plate, he’s capable of providing more to the leadoff spot than the Cubs have gotten all season.