Scoreboard Watching: Movement in the Wild Card Race, Status Quo in the Central Skip to content

Eventually, the Cardinals will drop a series – perhaps when they have to play a team with a winning record again – but it wasn’t to be this week, as they wound up taking three of four from the Giants, and maintaining a 2.5-game lead in the Central over the Cubs.

Meanwhile, the Wild Card race saw some shifting around, with both the Nationals and Phillies losing: 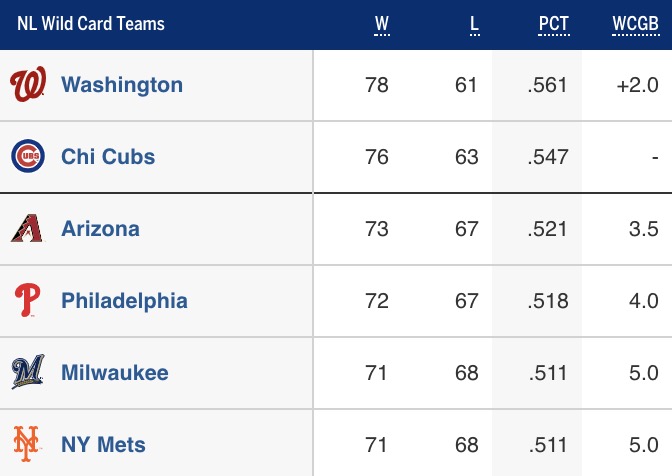 The Cubs are now a half-game closer to the Nationals for the top Wild Card spot than from the Cardinals in the division. It sure would be nice to move into that top Wild Card position juuuuuust in case the division doesn’t happen – at least you get the Wild Card Game at home. And as we saw last year, that guarantees you a wi… ah, well, nevermind. It’s still better to play at home.

Meanwhile, the Nationals continue their series with the Braves, the Phillies head to New York to face the Mets, and the Cardinals have to head out to … Pittsburgh.