Cole Hamels is Battling Himself More Than Opposing Teams, and the Hour is Growing Late Skip to content 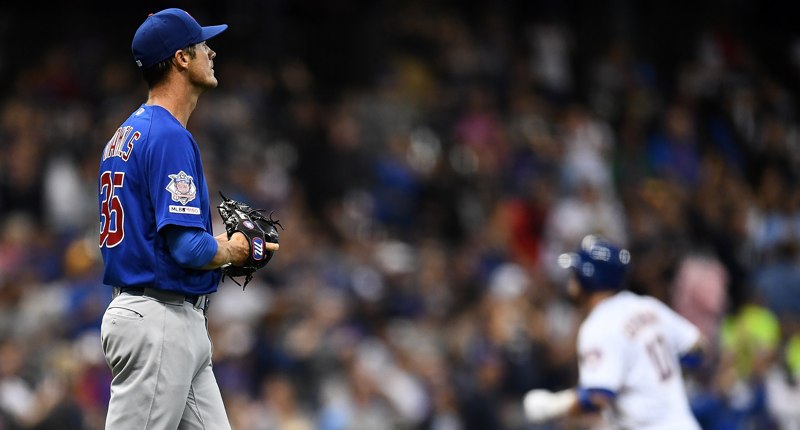 After another post-oblique-injury start that saw Cole Hamels down in velo, missing his spots, and getting hammered, it’s fair to be pretty concerned that we’re seeing a repeat of the last time he had an oblique injury, and didn’t get his mechanics back at an optimal level for a calendar year.

Since his return from injury on August 3, Hamels has posted the following intensely unnerving numbers: 7 games started, just 30.1 innings, 7.12 ERA, 18.5% K rate, 8.0% BB rate, 10.2% soft contact rate, 40.7% hard contact rate. Those are the numbers you see from a guy throwing a whole lot of 90 mph fastballs that he can’t locate properly … because that’s what Hamels has been, including last night, when the Brewers did this:

When your fastball velocity is down and you can't locate it, batters can not only wreck that pitch, but they can sit on – or spit on – your offspeed stuff, too. Hence, a batted ball log last night for Hamels that looks drenched in blood: pic.twitter.com/bLjtGt1XL5

“Sometimes, it’s a battle and you’d rather it be a battle against the other team as opposed to internally, against yourself,” Hamels said after the game. “Time is ticking and this is why I’m here. It’s to get the job done and to continue to put good games out there for this team to give them an opportunity to win, and I’m not doing so.”

Hamels on struggles to return to form since oblique injury. pic.twitter.com/EBX7zeI7tg

Time is ticking, indeed. The good news is that, if Hamels is healthy, we know that it can all click in a single start. It happened last year just before his trade to the Cubs (and then he got even better from there), and it’s absolutely conceivable it happens in these final few weeks. Hamels and pitching coach Tommy Hottovy have been working on it, and it has sounded for a little while like they know what needs to be done.

Not that it’s a guarantee he gets it back this year, in which case, the Cubs are just going to have to survive his spot the rest of the way, and then he may not be in the rotation in the postseason if it comes to that. Which is utterly crazy to think about after his second half last year and first half this year.

(And a weird side issue? If Hamels is terrible the rest of the way, at age 35, he may have pitched his way out of a justifiable qualifying offer from the Cubs, which would stink for a variety of reasons. But we’ll save that discussion for later.)