I Hate to Add More DOOM, but Kris Bryant Has Been Terrible at the Plate Since the Knee Tweak Skip to content 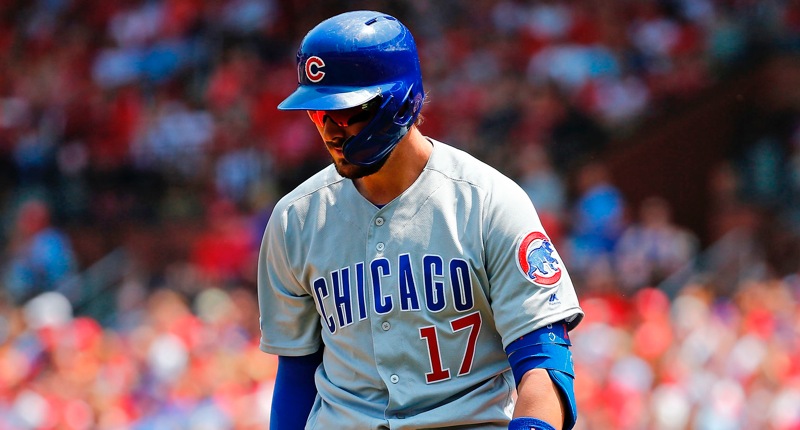 Not entirely unlike the shoulder issue that plagued his 2018 season, Kris Bryant has been playing through an ailment that impacts his availability (and performance, but we’ll get to that) enough to see him sit down periodically, but not enough to sit him down permanently unless it gets much worse.

So, then, barring a terrible turn for the knee, you can expect days like Sunday, when Bryant was out of the lineup because his knee was just not feeling right:

"When he comes in and says he needs a day, then you know."

Bryant's balky knee keeps him out of the lineup again, the latest in a series of recent setbacks for the Cubs: https://t.co/O3Y56O385J via @MLB

Bryant first started feeling the knee issue in late June, but it only reached our radar when he had to depart a game in San Francisco after feeling it a bit more on a late-July swing. Since then, Bryant has managed the issue as best he can, periodically needing a day off, like Sunday. And he won’t say the knee is impacting his performance at the plate.

Bryant said his knee issue doesnt affect him in the batter's box at all and feels it mostly on slides or hitting the first base bag hard or diving in the field.

He said an offseason should fix the issue no problem, but right now will just have to manage it for rest of year.

“There’s always nicks and bruises and stuff you’ve just got to deal with,” Bryant told Cubs.com about the injury and its impact on his performance. “Obviously, an offseason will make it feel much better, when you have an extended amount of time off. But we don’t have that. We have games we’ve got to win.”

That’s no doubt true, but unfortunately, since the tweak in San Francisco, Bryant hasn’t done as much as usual to help the Cubs win.

Seeing Bryant not at his best with his swing seems to square with Joe Maddon’s comments to Cubs.com: “He catches himself on his finish sometimes, trying to find his balance. There’s definitely something that’s causing kind of a weakness there, it looks like.”

Indeed, even as Bryant put up good numbers in July, it seems like Bryant was indeed seeing the impact of the issue as far back as late June under the hood:

Bryant has downplayed the knee's impact on his hitting. Maddon said that's just the competitor talking.

Maddon: "He catches himself on his finish sometimes, trying to find his balance. There's definitely something that causing kind of a weakness there, it looks like." pic.twitter.com/W1hxtEdzbR

I’ll add another chart to Jordan’s, where you’ll see a pretty steady creep in Bryant expanding his zone and swinging and missing: 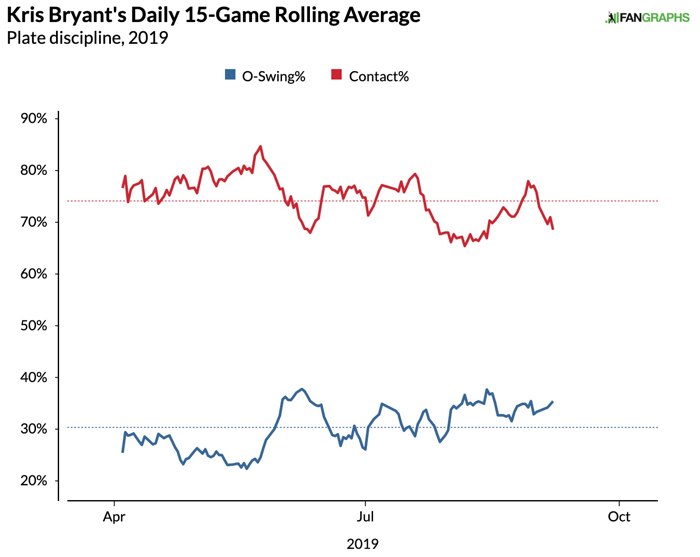 To be sure, there are natural fluctuations – even very long ones – over the course of a season for good players like Bryant. But here’s what we know: he felt a knee issue in late June, at which point various underlying metrics started to turn for the worse. then, starting in late July when he felt the knee issue enough to be forced from a game, Bryant’s overall numbers tanked to the point where he’s been 20+% worse than the average hitter for nearly a month and a half.

If that all sounds hauntingly familiar, that’s because it is a lot of what we were feeling/seeing/thinking/analyzing last year with his shoulder injury.

I guess at this point, for the rest of this year, we just have to hope that much of the poor performance in there was a little flukey, and the knee feels good enough the rest of the way for Bryant to be his normal self at the plate. I hate leaning on the word, but with three weeks left and a guy playing through an injury, all you have left is hope. Bryant has been particularly bad just the last two weeks (.200/.321/.267, 64 wRC+, 35.8% K rate), which, if you were optimistic, could give you the hook to feel like this might be a fluke – “it’s mostly just two bad weeks, and that can happen to anyone!” – or it could leave you feeling even more despondent that things are trending toward a bad place.