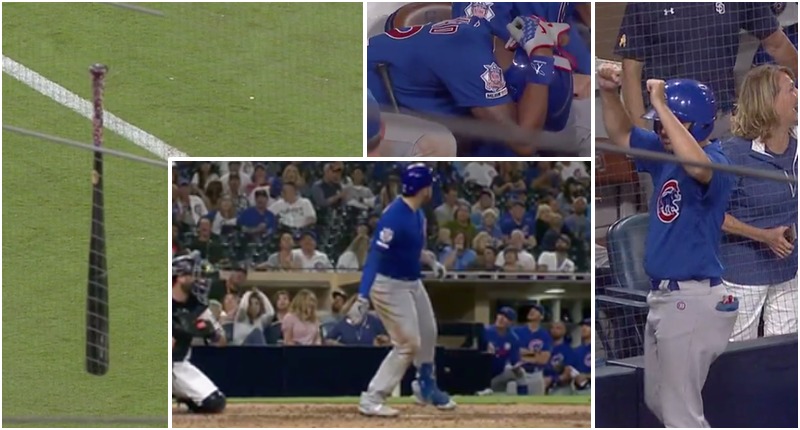 The Cubs have been rather unlucky this season with injuries. For example, their All-Star starting catcher, Willson Contreras, has battled through a number of injuries, limiting what is his best season as a big leaguer (which is saying a lot, because he’s had a few great seasons already).

However, the Cubs have also been extremely lucky – or well-planned – because Contreras’s backup, Victor Caratini, is a bonafide stud. In what has been his first (true) full professional season as a big league catcher, Caratini has hit extremely well for a catcher (or anyone else, really: .275/.360/.455; 113 wRC+) while providing steady defense behind the plate and even net-positive framing numbers.

Perhaps Caratini didn’t save the season, but he certainly stopped what could’ve been an ENORMOUS problem dead in its tracks.

Like last night, for example, when he provided not one, but two weird-funny moments at the plate, the each of which came in the top of the fourth inning. First, his bat flew out of his hands and got caught in the net behind the plate:

A bat hanging upside down, just as nature intended. pic.twitter.com/V8lcnzE2J0

A lot has to go right/wrong for a bat to get stuck in the net like that, but, hey, it provided a few laughs in what was already an extremely enjoyable game. Caratini hasn’t been a culprit of the flying bat too often, so we’ll give him a pass on this one and just enjoy the fun.

You can see them finally wiggle the bat out of the net right here:

But Caratini wasn’t done yet. Later in that same at-bat, he fouled one off hard, towards the Cubs dugout, which sparked Jason Heyward to have a little fun with his teammate: