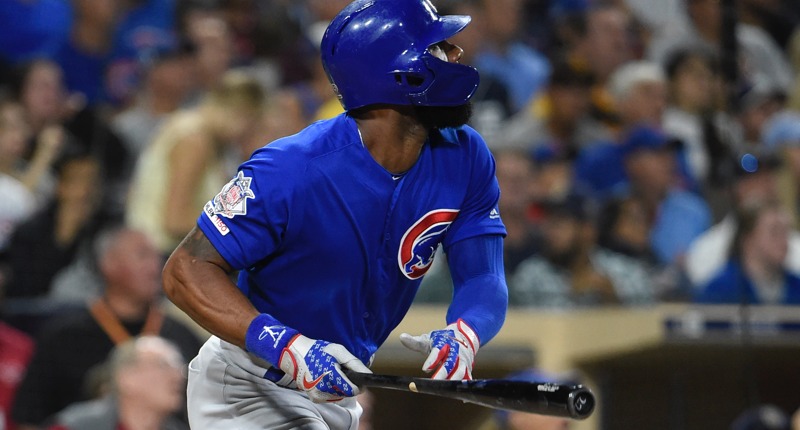 Last night’s game was a big one for Jason Heyward. The Cubs outfielder socked not one, but two home runs against the Padres – the first, a go-ahead, opposite-field blast in the second inning, and the other, a game-tying solo-shot to center field in the 8th.

In case you missed them last night:

It’s a two-homer game for Jason Heyward,
and
we
are
tied!#EverybodyIn pic.twitter.com/NRx5zNu1xB

The first home run wasn’t exactly demolished (98 MPH off the bat, 349 feet), but he did get ahold of the second one (104 MPH, 417 feet) and not off an easy pitch, either. In fact, that was the fastest pitch off which a Cubs player has homered all season …

Jason Heyward homered off a 99.9 mph pitch from Andres Munoz.

That's the fastest pitch that any Cubs player has homered off in the pitch-tracking era (since 2008).

Kris Bryant's HR off Munoz came of 99.6 mph, tied for the 2nd-fastest pitch a Cubs player has taken deep. pic.twitter.com/UIYfVV5hiz

You can talk about juiced baseballs being part of the explanation for Heyward’s power resurgence, and you wouldn’t be entirely wrong. HOWEVER, (1) these balls have been juiced for a few years now, and, perhaps more importantly (2) Heyward was just not getting his bat around for a 99.9 MPH for a homer over the last few years. That’s a good, old-fashioned good sign for him. And you love to see it.

And, hey, he’s got more homers and the second-highest ISO (isolated power) than all but one of his previous big league seasons:

But this wasn’t just one, singular good game for Heyward. He’s actually had a really nice last 25 plate appearances, featuring seven hits (including a double and three homers) plus five walks against just 4 strikeouts during that stretch: .350/.480/.850 (228 wRC+).

Now, that might seem like an hilariously small sample size – and it is! – but it serves dual purposes. First, yeah, sure: it makes Heyward look great, and that’s always fun to do, so whatever. But second (and more notably), it marks the first day Ben Zobrist returned to the Cubs starting lineup and took over the leadoff role.

Which opens up that whole can of worms:

With Jason Heyward raking again down in the order, it is worth pointing out that his time in the leadoff spot lasted five weeks, and in that time, he hit .160/.282/.310 with a 59 wRC+.

Otherwise, he's had a fantastic year offensively. That spot probably just isn't for him.

All the things we know (and hate) about Heyward’s profile when he’s at his worst offensively (slow rollers to the right side of the infield) were abundantly clear during his time as leadoff man:

Do you hate it when Heyward rolls over softly to the right side of the infield?

Well … that’s what happens when he leads off! pic.twitter.com/F6RlwJoAJB

More groundballs. More pulled balls. More weak contact. That is striking. The only thing Heyward did slightly better out of the leadoff spot was not strike out. But, frankly, he wasn’t striking out all that much anyway.

I don’t necessarily know why this spot has been so tricky for him (and so many other Cubs) this season, but he’s hardly alone in that. And while I can appreciate all the good he’s done elsewhere – and thank him for stepping up into that role when seemingly no one else could/would – it’s difficult not to imagine what his final line this season would’ve looked like had he just stayed put literally anywhere else.