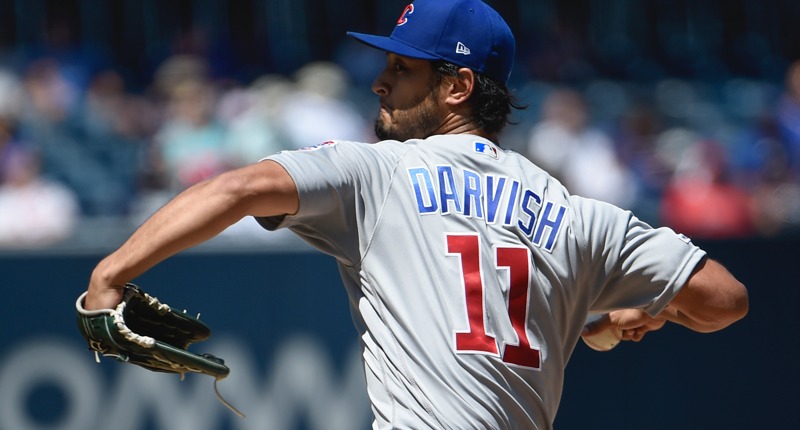 When Yu Darvish was forced to skip a start with forearm tightness earlier this month, I honestly thought that might’ve been it for him this season. I mean, I didn’t necessarily think he’d be “out” the rest of the year, but I did think that might’ve marked the end of Darvish’s dominant stretch of baseball – a guy with so many arm injuries last year experiencing forearm tightness/skipped starts in September? Come on … right? I wasn’t being irrational, was I?

Well, maybe I was. In his first start back on September 7, Darvish struck out 7 Brewers and walked 1 over 5.0 scoreless innings. And then yesterday, he absolutely went off on the Padres, with 6.0 scoreless innings featuring just 2 hits, 2 walks and … 14(!) strikeouts. Yes, 14 of the 18 outs he recorded were strikeouts. It was his most strikeouts in a start in six years.

All of the @Cubs Yu Darvish (@faridyu's) 14 strikeout pitches. #Cubs

By Game Score (82), that was Yu Darvish’s second-best start of the season, and it came at just the right time for the Cubs, who desperately needed a performance like that out of a starter, as well as a win. But perhaps more importantly, after the game, Darvish said that he had no issue with his forearm, praising the way the Cubs handled that situation (that’s a first), and even asked for the ball in big games down the stretch! You just love to hear that.

I was already excited to hear that Darvish was feeling stronger and happy to see the results shine through once again, but to hear him ask for the ball in the coming big games (there will be at least a few!) is huge for a guy’s who’s battled questions about his big-game fortitude in the past (unfairly, in my opinion, but that’s the reality).

But let’s go back to those 14Ks for a second, because they mark a little bit of history for the Chicago Cubs:

Last right-hander to record 14 or more strikeouts in a game for the Cubs was Mark Prior on Sept. 30, 2004. That's just crazy to think about in the swing-and-miss era we're in, but the Cubs have been missing that element from their rotation since peak Arrieta.

Yu Darvish struck out 14 batters without allowing a run today.

The only @Cubs pitcher in the Live-Ball era (since 1920) to strike out more in a scoreless start was Kerry Wood in his 20-K game in 1998. pic.twitter.com/DAovc4Vfuk

Mark Prior was the last right-handed to record 14 or more strikeouts in a single start and that was roughly 15-years ago already. And the only Cubs pitcher to strike out more in a *scoreless* start was Kerry Wood during his historic 20-strikeout game. How crazy is that? In my head, I could’ve sworn Jake Arrieta must’ve accomplished one or both of those feats, but I looked it up and … nope:

Arrieta: Most Ks as a Cub

So how was Darvish getting so many strikeouts in this one? Well, it was a little bit of everything. As you can see in that video above, exactly half of Darvish’s strikeouts were of the swinging variety, and he did have a total of 19 whiffs on the afternoon (which is pretty darn high). But he also seemed to be fooling the heck out of those Padres hitters.

To put that in plain English: the Padres had no idea what they were swinging at yesterday. Compared to Darvish’s typical results or even their own season averages, the Padres were swinging at far more pitches out of the zone and far fewer in the zone. So, yes, when you’re fooling batters that much, you’ll get some whiffs, but you’ll also end up with a lot of strikes looking, too.

To break this start down a little further, just note that Darvish managed to use EIGHT different pitches in his start:

And with the way he's able to manipulate his cutter (see the varying velocity), it's basically eight pitches. https://t.co/0fHajhgdMl

Of course, perhaps none were more valuable than his new knuckle curve, which, according to Jesse Rogers was especially effective yesterday … “Padre hitters were 0-8 with 7Ks in at-bats that ended with the curve. It’s the most K’s with the curve in what start in his career.”

But the story is even cooler than that, because apparently Darvish lost has hard curve after Tommy John surgery (eliminating what he considered to be his best pitch) … until he met Craig Kimbrel, who taught him his famous knuckle curve:

He said after Tommy John, he lost his hard curve, which he said was his best pitch. With the knuckle curve, Darvish said he feels like he has that best pitch again. https://t.co/jxpCKSP7iv

There’s just NOTHING like a player’s results (1) looking fantastic, (2) matching the peripherals, and (3) being tied to a clear, real-world change (like a new pitch). Yu Darvish might not necessarily be in his age-prime anymore, but he’s shown that when he’s healthy – and has certain pitches working – he can be as dominant as anyone else out there.