Owning PECOTA, Pirates HBP and Ejections, Hearing Outside Talk in the Clubhouse, and Other Cubs Bullets Skip to content 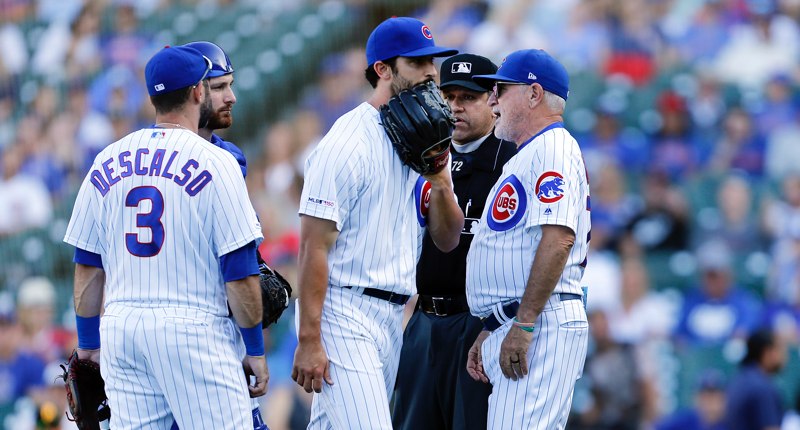 It was *kind* of a joke yesterday, but it did happen: with their 80th win of the season, the Cubs topped the infamous initial pre-season PECOTA projection of 79 wins from Baseball Prospectus. The Cubs are likely to end with considerably more than 79 wins, as we all suspected from the get-go, though I think you could argue PECOTA deserves some credit for spotlighting/underscoring what a challenging year this could be for the Cubs – as it has, indeed, been, particularly with respect to the older pitching staff.

But, yeah, they seem a little salty:

Congratulations to the @Cubs for officially beating their preseason PECOTA projection of 79 wins! 🎉 🎈 🎊 It turns out PECOTA had an anti-Cubbies bias after all, apparently.

Join in the fun, take the L, and roll along. You’re only a computer system, after all!

Joe Maddon about to go after the Pirates. pic.twitter.com/r2M7WxaG1m

“1,000 percent,” Kris Bryant believes that Joe Maddon’s contract situation, the trade/free-agency rumors and the clock ticking on The Core has contributed to this atmosphere around the Cubs. And that there is enough time left to live up to expectations. https://t.co/ZgcDtJkcFX

“That whole one-game-at-a-time mentality is harder to maintain when Maddon is a lame-duck manager, Bryant’s name has been floated in trade rumors, the media is predicting a shake-up, Cubs Twitter is melting down and this core group is getting closer and closer to the free-agent market.

‘But personally, whatever happens for me happens. All I can do is really focus on these last (14) games and doing all I can to help the team win. And I think I’ve been doing that for five years here now. I’m willing toot my own horn a little bit — I think I’ve done a pretty good job of it.'”

Kris Bryant ties Ernie Banks for the most homers by a Cub in his first five MLB seasons (136).#EverybodyIn @FellowesBrands pic.twitter.com/xqP5rYZmUB

Who is Matt Martin and why does Nick Castellanos swear by his teachings? @sahadevsharma talked to the charismatic coach: https://t.co/u9F9lY6EgX

On the night we celebrate one of the best to ever do it, Ichiro Suzuki addressed the crowd during the pregame ceremony. 5️⃣1️⃣ pic.twitter.com/bhy3dfGHe9

Congrats and best wishes to #Cubs organist @GaryPressy who will retire at the of this season. More later in @dailyherald

We have no words.

Mitch Trubisky Explains What Went Wrong With the RPOs https://t.co/hiRW21EWq1