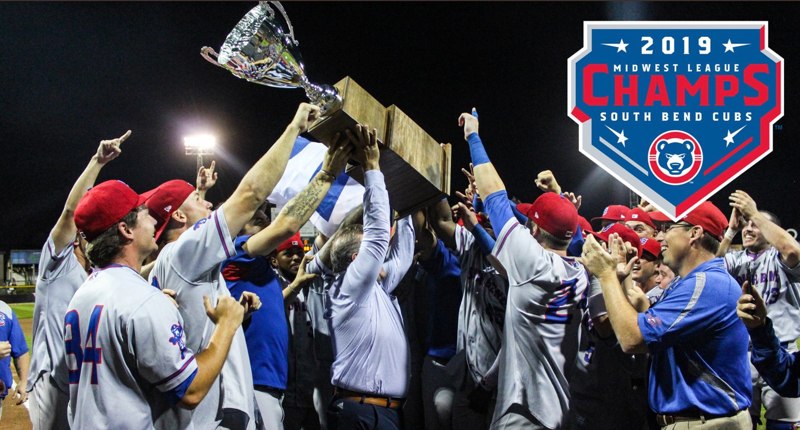 The South Bend Cubs captured the Midwest League championship last night in dominant fashion, as they completed a sweep of the Clinton Lumberkings with a 5-0 win.

Watch the conclusion and tell me winning a title like this isn’t really meaningful to these players:

South Bend finishes the season on a nine-game winning streak, as they swept the playoffs in seven games. South Bend allowed just 2.1 runs per game in the playoffs, riding superb pitching to their first league championship as a Cubs affiliate.

This was the eighth start this year (in 23 tries) that Riley Thompson didn’t allow a run. His ten strikeouts far surpassed his career-high of seven, and he’ll go into 2020 looking to build on his career-best start. The game was not on MiLB.tv (I’ll save the soapbox rant for another day), but Cubs Den’s Michael Ernst was in attendance, and offered this review:

He's getting whiffs on all of his offerings.
Filling the strike zone. 0 walks. 42 strikes in 57 total pitches.
Thought he might be tiring in 4th but rebounded and pitches looked crisp in 5th.

Thompson probably could have been promoted to High-A Myrtle Beach at some point this season, but he never quite crossed over into consistently owning the league. Thompson pitched into the sixth inning just one time all season, back on May 24, and only posted more strikeouts than innings five times.

We have to remember how far Thompson has come, that this wasn’t a traditional high bonus college pitching selection that should be outclassing the Midwest League. Thompson pitched just 54.2 innings in three years at Louisville, and with a 5.92 ERA and 6.3 BB/9. That the Cubs have so quickly made him a real starting pitching prospect is impressive, and it has to be gratifying to see his best outing come on such a big stage.

Next season, expect the Cubs to loosen the reins on Thompson’s workload a bit, and I suspect he’ll spend some time in Mesa in the Pitch Lab. His change-up made great strides this year, but at times I felt his good curveball would get loopy. He’s shown a real aptitude for the pitch, so gaining consistency there is huge. Thompson also has the ability to pitch with more and more velocity, and get more and more sink on his fastball, and I look for that to be explored as well.

Thompson is one of a dozen players that has now won two championships in the last two seasons. The Eugene Emeralds surprised the Northwest League last year with a worst-to-first playoff run, winning all five playoff games in 2018. So, we now have a good number of Cubs prospects that have a career minor league playoff record of 12-0 with two championships. That cannot be bad for development.

Is there a casino that will book a 2020 Myrtle Beach Pelicans championship? Hello? Bueller?

…I think of Weber being in the middle of everything, of Carrera’s maturity beyond his years, of Cam Sanders not allowing any dang hits, Durna’s contact ability, Thompson’s steadiness, Daniel’s grit, Remy’s breakout, Glowicki’s returning dominance, Barry and Lawlor’s nastiness.