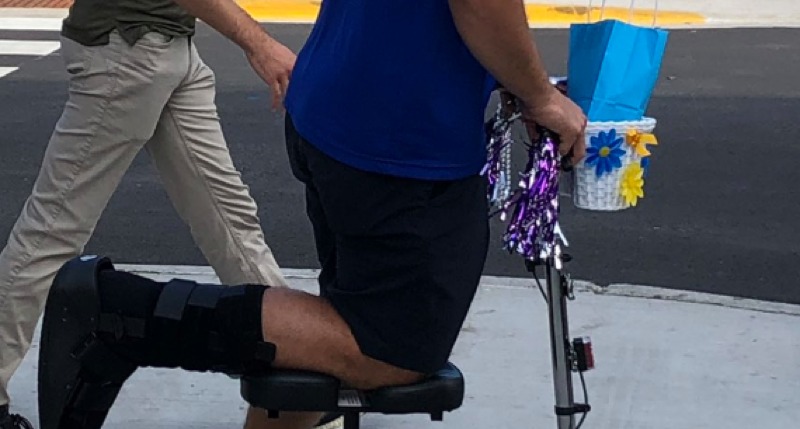 Although it brings me no pleasure to continue reminding you that the Chicago Cubs are playing without Anthony Rizzo while battling a 2.0-game deficit in the NL Central with two weeks left to go in the season, he keeps doing things that merit our attention.

Earlier today, for example, Patrick Mooney reported Anthony Rizzo’s continued work for hospitalized kids and their families in the city of Chicago, despite the big, bulky boot he’s lugging around 24/7 … which brings me to the second feel-good Rizzo post of the afternoon: his scooter!

Last night, after the game, Sahadev Sharma tweeted this ultimate tease, with no picture for out enjoyment:

Rizzo's knee scooter that he's using was all decked out in post game. Once we wrapped up talking to Castellanos, we heard a honking noise. Rizzo scooted by with streamers and a basket full of goodies on the scooter

As soon as I saw the tweet, I was dying to get a visual … thankfully, it didn’t take too long:

Your First Baseman could never pic.twitter.com/m3LBwI4pQb

I don’t know why, but that absolutely cracks me up. It’s so quintessentially Rizzo to make the best of a bad situation, while making his teammates laugh in the process. I love it. It reminds of that time he wore his uniform on the overnight flight:

Anthony Rizzo Flew in His Uniform, Came to the Park in his Uniform, Didn’t Pack a Change of Clothes https://t.co/6mNSUYXEao pic.twitter.com/iM7OG7PnMS

This guy is the best.