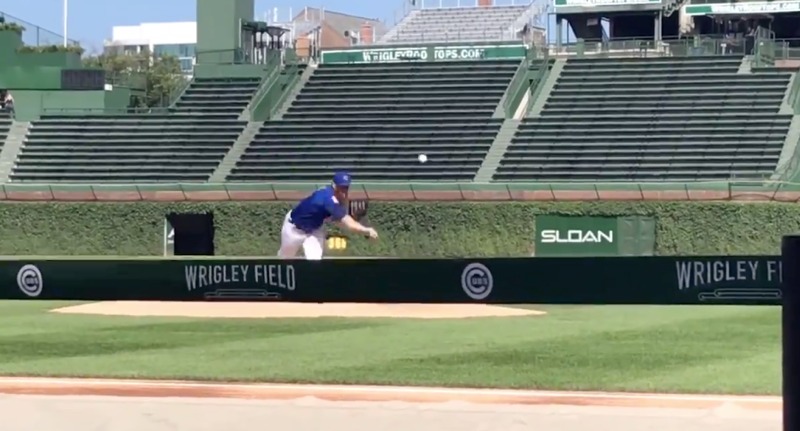 The Cubs didn’t actually get to see their closer on the mound until June 27th this season, and unfortunatly – thanks to not one, but two stints on the injured list – he’s managed just 19.0 innings pitched since then.

Indeed, he’s still working his way back from the right elbow inflammation that’s kept him on the shelf him since September 2nd, but to that end, things could be progressing.

Earlier today, Kimbrel performed a bullpen session/simulated game off the mound at Wrigley Field and although we don’t yet know how his arm will respond to it, things sure looked good:

Tony Kemp even stood in there to face Kimbrel from both sides of the plate:

It’s difficult to tell exactly who was in attendance, but from the looks I can see here here, and here, it looks like Theo Epstein, Tommy Hottovy, and Joe Maddon (at least) were all in attendance, but there were obviously many more eyes on hand than that.

As for the simulated game itself, Kimbrel threw 16 pitches (mostly fastballs, with some breaking balls mixed in), which is great to hear, though he reportedly didn’t have much going in terms of command (an even split of balls and strikes). At this point, though, you shouldn’t worry too much about his command, even if that has been an issue for him at times this season. Instead, I’d be focused more on his velocity and overall response to the workload. Unfortunatly, we don’t really have an answer on either of those points yet either, but the reporters in attendance did continue referring to his “heat,” which can’t be a bad sign.

We’ll update this post as soon as there’s more actual information out there, but for now, I thought you’d like seeing the progress as soon as possible.

UPDATE: Just what I was hoping to hear …

Kimbrel could be ready this weekend, per Maddon

The Cubs have an absolutely enormous series against the Cardinals this weekend, and while I’ve already resigned myself to the fact that they’ll be playing it without their starting shortstop and first baseman, it sure would be nice to have their closer. Fingers crossed.