Must-Read of the Day: Boot or No, Anthony Rizzo Is Doing His Part for Kids, Families, and Chicago Skip to content 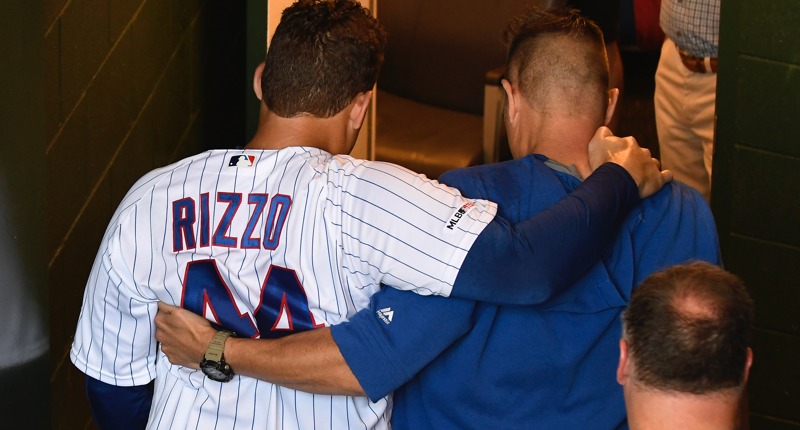 On Sunday, September 15th, Anthony Rizzo was charging quickly towards the plate to field a bunt down the third base line, when he rolled his ankle and went down in heap of pain (emotionally echoed by Cubs fans everywhere).

#Cubs worst nightmare. Anthony Rizzo leaves the game after turning his ankle badly running in to field a bunt. In serious pain and helped off the field @WGNNews pic.twitter.com/USMR9w5Bch

Fortunately, X-rays on Rizzo’s ankle came back negative for any fractures (that was a win), but an MRI did ultimately reveal a moderate right ankle sprain, which has forced Rizzo into a boot for at least 5-7 days. Unfortunately, the outlook beyond those 5-7 days remains unclear. And with just under two weeks left in the regular season, a Rizzo-regular-season-return is not looking likely. That hurts. Especially right now.

As we discussed this morning, the Cubs have a two-game deficit to make up in the division and razor-thin 1.0 game lead for the second Wild Card. Going the distance without Rizzo on the field (and with seven head-to-head matchups against the Cardinals remaining) is going to be rough, even if some combination of Ian Happ, Ben Zobrist, and Victor Caratini can do plenty to cover in his absence.

But at least Rizzo is still helping out his team, by spreading cheer in the clubhouse:

Rizzo's knee scooter that he's using was all decked out in post game. Once we wrapped up talking to Castellanos, we heard a honking noise. Rizzo scooted by with streamers and a basket full of goodies on the scooter

Is there anything more Rizzo-esq than beautifying his knee scooter with streamers and a basket full of goodies? Even when this guy is incapable of playing, he’s still the team captain. But that’s not all.

Rizzo hasn’t just continued his efforts in the clubhouse. Thanks to Patrick Mooney’s excellent, must-read piece at The Athletic today, we know Rizzo’s also still doing his thing for children’s hospitals in Chicago:

At Lurie, Rizzo spends several minutes chatting with the Prister family. He knows that it’s not enough, but he understands that every bit helps, and he pulls a $5,000 check from his pocket and gives it to Prister. The overwhelmed father thanks Rizzo and holds it together until he leaves the room.

And then he breaks down crying.

“It’s an incredible thing that lifts you up in a dark, dark moment,” Prister said in an interview a month later. “You’re just hoping and praying and lost. Anthony gave us a moment that lifted us.”

The article is a reminder of not only how lucky Chicago is to have Rizzo, but also how lucky we all are to have whatever good moments we’re afforded in this life.

If you have a second to spare this afternoon, head over to The Athletic and read about Anthony Rizzo. Even in his own challenging moment, he’s keeping the kids on his mind. Kudos to him. He really is one great Chicago Cub.