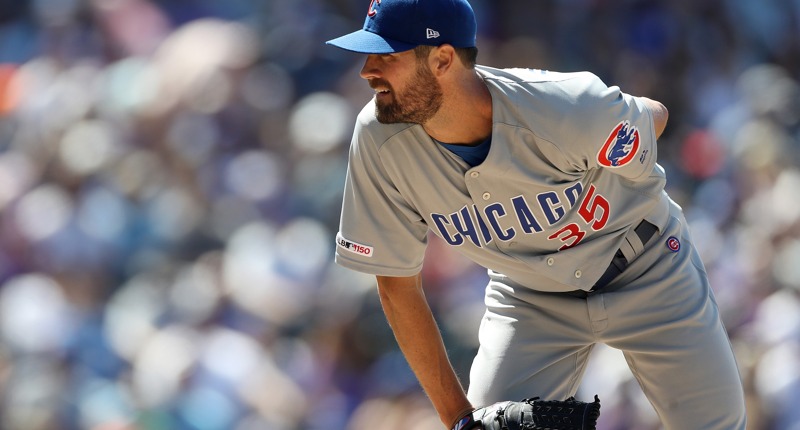 The Cubs are about to begin an extremely crucial four-game series against the Cardinals at Wrigley Field this weekend, but their rotation schedule has already been thrown for a loop.

Hamels dealing with left shoulder fatigue. Mills will go tomorrow, Q on Saturday, Darvish Sunday. Expectation is Hamels will get back in rotation at some point during road trip.

Initially, Jose Quintana was scheduled to go tomorrow with Cole Hamels on Saturday, and Yu Darvish on Sunday. But now, Hamels has been scratched from his start with left shoulder fatigue. Alec Mills will take his place, but he’ll also swap spots with Quintana so the new matchups look like this:

As Sahadev Sharma points out, Hamels is expected back sometime shortly thereafter.

Obviously, we can’t know what’s going on with Hamels and shoulder fatigue isn’t out of the question for a 35-year-old starter at the end of a season … but this might just be more of a team-decision than anything else. What I said about Hamels in the series preview earlier today should help explain why:

Cole Hamels MUST be better on Saturday than he has been over his last three starts (11.0 IP, 8ER, 16H, 11BB, 13Ks). Actually strike that, over his last NINE starts: 6.39 ERA, 5.84 FIP. If he’s not, the Cubs will have a very tough time winning that game and that leaves the margin for error everywhere else razor thin.

Hamels just hasn’t been himself since returning from the injured list earlier this season (note that was an oblique injury, not his shoulder) and these games are a little too important to hope that he’ll magically figure it out in time.

Mills, meanwhile, has been pretty good this September (6.0 IP over three appearances with 9 strikeouts, 0 walks, and just 1 earned run) and should be able to help the Cubs win. I wouldn’t be surprised to see Tyler Chatwood saved tonight/deployed after him tomorrow, to make it something of a bullpen game. But yeah, I think this move makes sense.