Scoreboard Watching: Cubs Now Fully on the Outside Looking In
Search
Skip to content

I don’t intend this feature to feel like a funeral march, but after last night, it’s difficult. Losing any game right now is a big blow, but losing one of the games at home to the Cardinals? Well, sir, the Cubs really could afford to do that only once.

And now they’ve done it.

So the Cubs are 4.0 games back of the Cardinals, more or less needing to win every game this weekend to give themselves a realistic shot of tying or passing the Cardinals by the end of the year.

Of course, the Cubs also more or less need to win every game this weekend to try to catch back up to the Brewers, who not only have a soft schedule remaining, but they just passed the Cubs for the second Wild Card spot.

Yes, for the first time in a long time, the Cubs are now completely on the outside of the playoff picture looking in: 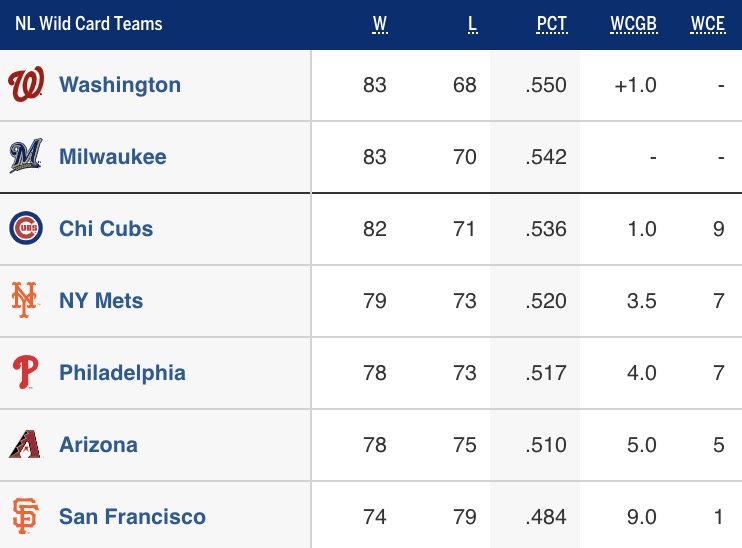 From here, the Cubs have three more at Wrigley against the Cardinals, an off-day, three in Pittsburgh, and then three in St. Louis. The Cardinals have a trip to Arizona in-between their Cubs series, so you better hope the Diamondbacks beat up on the Padres this weekend so that they still have technical, theoretical playoff hopes by the time that Cardinals series starts.

As for the Brewers, they now host the Pirates for three and then go to Cincinnati for three. Would be nice if the Reds played them as hard as the Cubs. The Brewers end with the Rockies in Colorado, which is always tough, regardless of the circumstances. It is absolutely plausible that the Brewers finish up no better than 5-4 in these nine games, but even that would mean the Cubs have to go 6-3 just to tie them. And that, in turn, means even if you assume the Cubs sweep the Pirates, they still have to at least split the remaining six games against the Cardinals.

Any way you squeeze it, the Cubs have to win these games this weekend against the Cardinals. Losing last night was a huge blow.