So ... How Did Anthony Rizzo Pull Off That Miraculous Comeback, Anyway? Skip to content 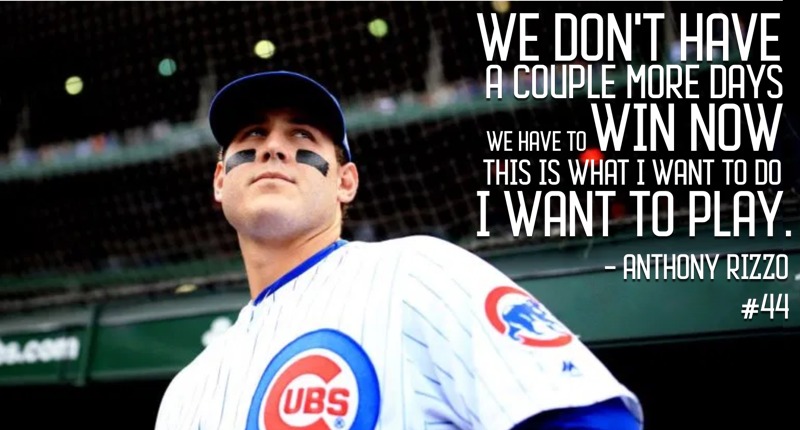 I just can’t come to terms with how much was lost last night – both in the standings, and in the fun of life. The Cubs are now 4.0 games out of first (instead of 2.0) and 1.0 game behind the Yelich-less Brewers for the second Wild Card (instead of tied) and that’s all, you know, pretty much awful.

But I also can’t shake the other half it – the part where we were denied the sort of comeback story that can galvanize a team and propel them into/through the postseason. Or at least that’s the story we might get to tell. Anthony Rizzo’s surprise comeback could have been exactly that. He’s the right guy. That was the right performance. The Cardinals were the right team. And late September was the right time. Alas, not the Cubs. Not last night. Not this year.

Even still, there are 9 more games to play and the Cubs do still have a chance to make the postseason. And with that in mind, let’s at least try to figure out what happened with Rizzo yesterday, and see how the shocking comeback came together.

After all, he looked like this just a few days ago:

rizzo going to go break up kris and nick pic.twitter.com/IHiP92hawG

So here’s what happened per Jordan Bastian (Cubs.com): Rizzo arrived to Wrigley in a walking boot yesterday, having already “ditched” his supportive medical scooter the day before. And as the day went on, he passed a few tests/checked a few boxes like putting on his spikes, walking, jogging, hitting, etc.

Of course, it wasn’t all an obfuscated miracle: Rizzo received a cortisone shot on Monday, did as much prep work over the week as he could, and also, you know … played through some pain:

Rizzo did lots of rice and ice and compression and elevation. Felt better every day. Passed all tests pregame and gave it a go.

Rizzo received a cortisone shot in his right ankle Monday and has been working around the clock with the Cubs medical staff to get to this point.

His ankle it taped and he can't hurt it worse, so it will just be about pain tolerance right now.

And his teammates did take notice: “That was huge,” Kyle Hendricks said. “The work he’s been putting in the last few days to try to get himself back on the field has been incredible. That’s the guy he is. One of our leaders. So, to have him back out there, it lifted everybody up for sure.”

But Rizzo’s teammates weren’t the only ones lifted up by his surprise return to the starting lineup last night. Just watch (and listen) as the crowd at Wrigley Field begins to realize there’s been a change:

The Wrigley faithful find out that Rizzo is back in the lineup… pic.twitter.com/5WWleEqKpV

And check out his “Undertaker” walk-up music, which just fit so perfectly and added to the #Hype:

Anthony Rizzo's walk-up song on his surprise return to the @Cubs lineup?

This team came so close to coming through for Rizzo, who came through for them BIG-TIME last night, in case you forgot:

But I think the part that breaks my heart the most was Rizzo’s quote before the game: “We don’t have a couple more days. We have to win now. I love this team. This what I want to do. I want to play.” That man busted out for his team, but they ultimately came up just short.

So what’s next? Well, according to Tony Andracki, Rizzo felt good after the game and walked out of the interview room without his boot or scooter (which had actually been retired on Wednesday). He’s right back in there today atop the order, so he must be feeling pretty decent.

And, hey … if he has the same doctor, he should be fine, right?