Kris Bryant Injured at First Base, Helped Off the Field (UPDATES: Ankle) Skip to content 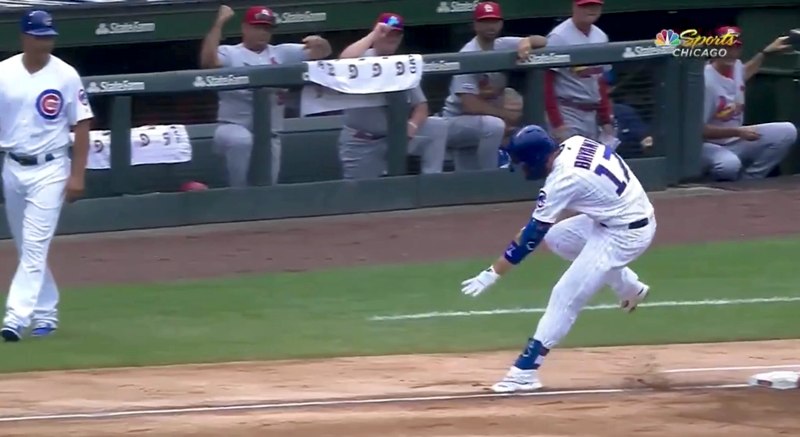 This nightmare definitionally has to end soon, but it’s going to terrify us incessantly until then.

Today’s installation features Kris Bryant trying to beat out a double play, slipping on a wet first base, and rolling his ankle (and also awkwardly bending his bad knee). He had to be helped off the field after this play:

Kris Bryant leaves the game after this awkward play at first pic.twitter.com/q3tAX0d3KR

You don’t need me to pretend to be a doctor here, as you can see the ankle fully rolled. Even if it’s “OK,” that baby is gonna hurt something fierce – as we just saw with Anthony Rizzo.

Incidentally, Rizzo had to help Bryant off the field:

Rizzo and JHey walking KB off the field is my whole heart breaking. pic.twitter.com/51vv1Qgs1u

Kris Bryant being helped off the field after getting injured trying to beat that double play. #Cubs pic.twitter.com/O7iH8FvkWC

He was in obvious pain. We’ll update when able. Hopefully it’s just the ankle, and hopefully it *merely* ends Bryant’s season. What you don’t want to see is a surgery-requiring injury, or something that could impact him for next year.

Visible pain on Bryant’s face as he’s helped off the field. The #Cubs group of walking wounded keeps growing. Such a hard thing to watch… https://t.co/lYSIk7YWTB pic.twitter.com/gxFKmFQNlA

UPDATE 2: It is officially just being listed as an ankle sprain with no fracture:

Initial X-rays did not reveal a fracture. pic.twitter.com/VpXCCbF8jp

Obviously the range of damage with a sprained ankle can be quite wide, but if the knee is not involved at all (TBD?), that’s great news. Now we just hope it’s not a super severe ankle sprain with all kinds of ligament and tendon damage in there, requiring surgery. Fingers crossed, and more details when we have them.