Emotional Yu Darvish Wears the Full Weight of the Cubs Loss, But He Shouldn't Skip to content 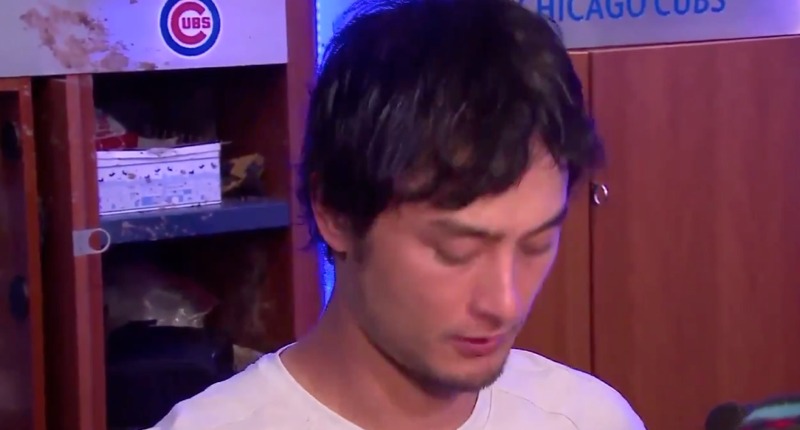 This Cubs season was probably over long before yesterday’s game began – let alone before Yu Darvish gave up a couple of runs (including the game-winner) in the top of the 9th inning.

But from the look of Darvish’s locker (and face) after the game, you would’ve thought he lost the entire season all on his own right then and there.

Yu Darvish said he had no words to describe his frustration. Pointed to his locker, which had mud caked across his silver nameplate. The result of an anger-fueled postgame throw of his muddy spikes.

Yu Darvish is one of my favorite athletes to cover

"I'm so frustrated. Worst in my life. You can see it. Because we have to win, especially today."

Darvish was understandably thrilled to get the nod for the 9th inning, and I get that (he had a chance to finish what was still a really phenomenal game) … but that’s also why I hate that he let the results get to him. The Cubs had already dropped three in a row to the Cardinals, managed to score just 2 runs over 8.0 innings (again), and were not going to magically salvage the season.

Nothing Darvish could have done would’ve changed that. And for a guy who’s battled back this season with so much dedication *and* success, you just hate to see HIM be the one who is wearing it.

In fact, the only negative I can drum up about yesterday’s brutal ending to the Cardinals series is that it clouded yet another dominant performance from Yu Darvish, who had one hell of a final 2019 start at Wrigley Field.

I mean, every single pitch he used was working:

Just wanted to see how much space that would cover. pic.twitter.com/1iiwWO7ngK

According to the stats over at Brooks, Darvish’s cutter earned the most whiffs on the night (10), but his two-seamer (2), four-seamer (3), slider (3), splitter (3), and new knuckle-curve (2) all contributed just fine. Indeed, Darvish sat at 94-95 MPH all day and touched 97 MPH on occasion. He simply had it going, and most of the results speak for themselves. But I’ll speak for a few of them …

… Darvish struck out 12 Cardinals last night, which actually checks a number of boxes for the season/his career. Darvish has now struck out 229 batters in 2019, which is the second-highest single-season total of his extremely strikeout-heavy career:

More narrowly, Darvish’s 12 strikeouts make him the first Cubs pitcher in recorded history to have at least 11 strikeouts in three straight games and the first NL pitcher with 12+ strikeouts in 3 straight starts since Randy Johnson in 2001. They also helped bring his 2019 strikeout rate to 31.3%, which is just outside the top 5 in MLB.

Of course, if you limit your scope to just the second half of the season, the results are even more impressive.

How’s that for company? When you’ve got ONLY Gerrit Cole and Justin Verlander ahead of you in any one stat, you’re having a good run. And it’s important to remember just how good this run has actually been.

You wouldn’t know it based on his overall season numbers (because he really did struggle at the beginning of the season), but basically, yes, Yu Darvish was one of the best starting pitchers in baseball all year when you look under the hood.

And that’s why I’m right there with Brett on my excitement and anticipation for Darvish next season … that is, assuming he doesn’t opt-out of his contract:

Among the few great stories from this season, Yu Darvish's turnaround and subsequent explosion are right up at the top. Could be the Cubs' AAAAAACE from beginning to end next year, and regardless of the offseason, Cubs are gonna need that.

We’ll have to dig into that opt-out decision soon. He’s currently owed $81 million over the next four years, which actually looks like a really nice contract for the Cubs.