I’ll say up front that I think it’s unlikely Chicago Cubs GM Jed Hoyer winds up departing the organization right now, and would regard it as at least as plausible that there tentative transition plans in place that, when Theo Epstein decides to move on from the President’s chair, Hoyer could simply slide up the ladder.

I know nothing about nothing. I’m just saying, since we know Epstein’s contract ends in two years, and we also know he’s said staying in one place for 10 years is about right, it’s as likely that Hoyer is the next man in charge in Chicago as it is in another city. I feel like that’s a necessary preface when discussing the opening at the top of the Boston Red Sox’s baseball operations.

Jon Heyman was on The Mully & Haugh Show today on 670 The Score, talking about all kinds of things Cubs-related. You can catch the interview here at The Score.

We talked earlier about the Cubs managerial stuff, which is more imminent and likely for the Cubs, but Heyman’s comments on the Boston job definitely raised my eyebrows.

After dismissing Theo Epstein as a possibility to go back to Boston, Heyman quickly pivoted to Epstein’s GM here in Chicago.

“I think Hoyer is probably the more likely one for Boston at this point. That would be my guess,” Heyman said. “I had Hoyer and [Diamondbacks SVP and AGM Amiel Sawdaye] as the two most likely at this moment … I could see Jed going back there. He certainly has a rapport with [Red Sox Owner John] Henry and the other people there in Boston. That’s a possibility.”

Hoyer became the Cubs’ GM in late 2011 after two years helming the Padres. Before that, Hoyer was a long-time assistant under Theo Epstein with the Red Sox.

I feel like I should caution here that this is not something being widely circulated at the moment, and Theo Epstein said on the radio recently that no one with the Cubs was involved with any Red Sox openings. I suppose that could have changed in the interim and/or could change in the offseason, and it’s not like we’ve heard much coming out of Boston yet. It would surprise me if Hoyer was targeted and poached by the Red Sox, but you can never discount past relationships. And Heyman said what he said, so I guess it’s something to discuss now. 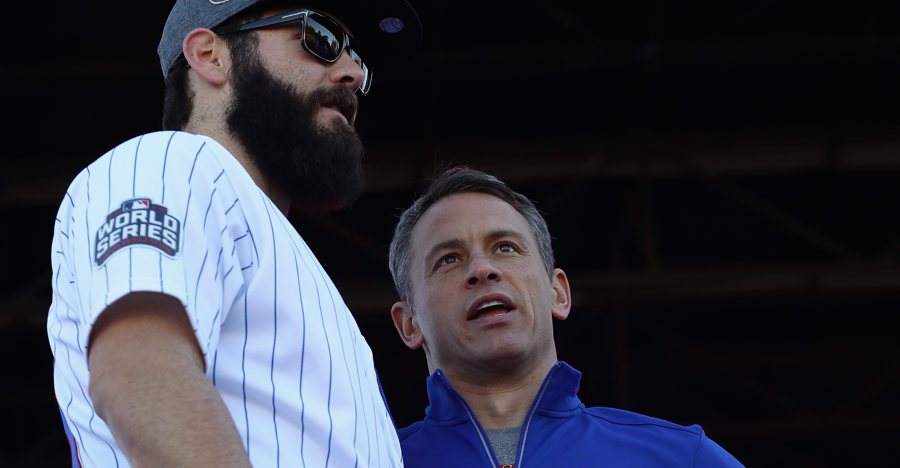 Hoyer has had a great deal of professional success, and he’s been part of three different organizations now (Red Sox, Padres, Cubs), serving in various capacities. It’s not inconceivable to think that Red Sox ownership was already thinking about him when they dismissed Dave Dombrowski, and it’s also not inconceivable that he might want to return to Boston in the top seat if it was made available to him.

The Red Sox opening was already on our radar, as they’ve done some cleaning out on the scouting and player development side, where the Cubs currently have an opening after moving Jason McLeod over to the pro side.

There will probably be some level of intertwining before these early-offseason front office moves are complete, but I’ll admit that I kinda hope it doesn’t reach Hoyer at this time. Obviously I’ll always cheer on a guy who gets a promotion and a gig where he’s happen, but the Cubs have already had a whole lot of brain drain in the front office in recent years (Shiraz Rehman, Jared Porter, Jason Parks, etc.), and it would be nice not to lose more right now.