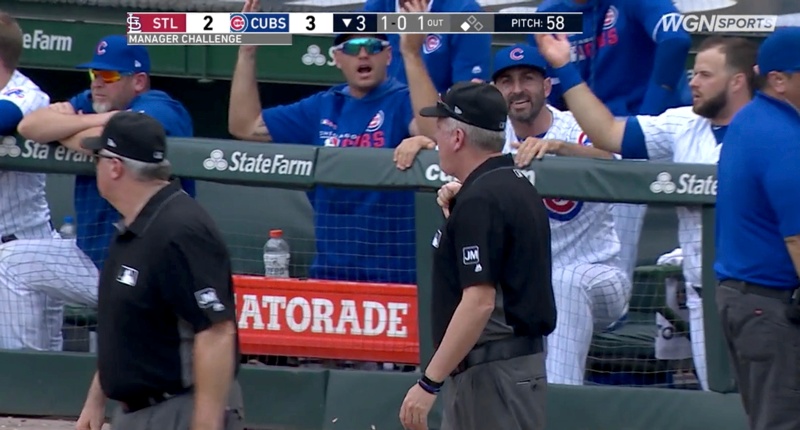 I’m sorry, but this just makes me laugh, and also makes me want to give Mark Loretta a high five.

The Cubs’ bench coach has been suspended for tonight’s game against the Pirates for, apparently, stating his case in opposition to a replay call a little too aggressively:

Chicago bench coach Mark Loretta suspended for one game and fined an undisclosed amount by MLB for his inappropriate conduct following a Replay Review during Saturday game vs. Cardinals.

The play in question must have been the Kyle Schwarber slide at third base, which wound up looming large in Saturday’s loss:

To me? Carpenter does get Schwarber with the heel of his glove pretty clearly. That’s not a hill I would have died on.

HOWEVA, replay reviews have been a joke for a long time now, including one earlier in the series that was brutally wrong. So if Loretta had the bad feelings build up a bit and wanted to go off in that situation for one of his players? Fine by me. FIGHT THE POWER, MARK!

Not sure exactly what he did (there was no ejection), but my hope is that he suggested that the umpires immediately review the BOFA play. That’s a future manager move right there.

Mark Loretta was suspended because he put the umpire review headset on to get an explanation from New York on Saturday. Might be against the rules but that’s kind of funny.