Post-Elimination, What Do We Do with Cubs Games? There's Still a Lot to "Play" for, Actually! Skip to content 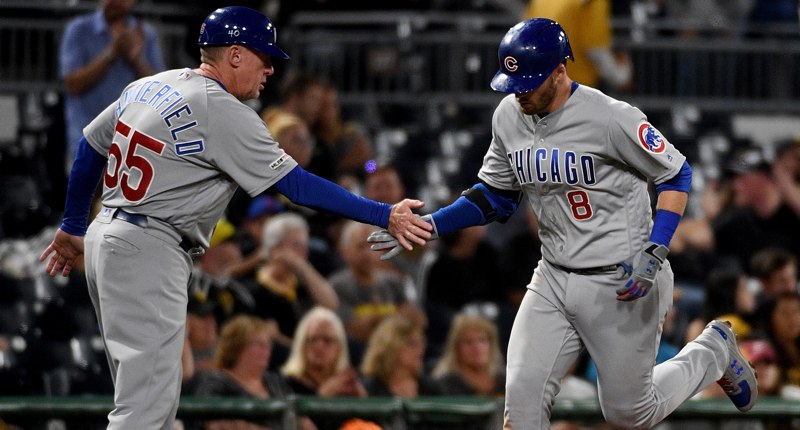 The Cubs were officially eliminated from postseason contention last night for the first time since the 2014 regular season, and boy howdy does that suck. I am not emotionally jarred by it at this point because Saturday’s loss was the final gut punch for me, but it’s going to make the next month a whole lot less fun and exciting.

Against that backdrop – knowing that there is no postseason ahead, and the rest of the regular season is meaningless in that particular scheme – what are we as fans supposed to do with these final four games?

Well, I don’t want to tell anyone else how to fan, so the primary answer here is, by all means, do whatever the heck you want with the final four games! Cheer as hard as you ever did! Or root for the Cubs to lose! Or focus on the other playoff races! Or totally check out to rest up your weary soul! There’s no wrong answer.

But if you’re looking for some guidance, or at least are interested in how I’m viewing these final four games, here’s where I’m at.

From a pure fan perspective, it’s going to be nice to watch these baseball games just for the baseball of it. That’s how I’ve been with these first two games in Pittsburgh, and I gotta tell you, it makes even comical losses – as both of the games have been – fun to watch.

I don’t care in the least about the outcome, so I’m just seeing what happens. Ian Happ hits a homer? Sweet, that’s cool. I like that. David Phelps goes wild and throws the game away? OK, that’s just hilariously absurd. Jon Lester does his thing, stalking around on the mound, as competitive as ever? I like that.

That ties to another way I’m viewing these final four games: whether I care about the final outcomes of the games or not, I *do* want to see individual players perform well (and stay healthy). It matters for future planning and trade considerations (barely, but at the margins), and it also matters to the players themselves. They want to be as happy as they can and do well, so what the heck, why not hope they do well?

Specifically, I’d like to see Nico Hoerner get time at second base the rest of the way. I think he hits AAA to open the 2020 season regardless, but if he’s going to impact the big league team next year, it’s probably going to be as the starter at second base. Might as well start that transition now, since he absolutely looks like a future big leaguer.

I would like to see Ian Happ get four starts the rest of the way. It’s been a challenging and challenge-filled year for Happ, who responded to those challenges by working on his game at the plate (and dramatically reducing his strikeouts). I would love to see him rake these final four games.

It’s not likely at this point, but maybe Kyle Schwarber can hit three more dongs to get to 40? And maybe Nick Castellanos can get two more doubles to get to 60?

It would be nice to see Cole Hamels able to return for one final start, AND pitch well. I don’t think it changes things with respect to a qualifying offer – it’s likely off the table at this point – but who knows? If he goes out and looks healthy, dominant, and sits at 93-94 for six innings?

I could go on, but you get the idea: there are still individual player-level things that I’d like to see happen, and will be enjoyable to follow through the weekend.

There’s also the competitive reality that the Cubs’ final record will impact where they select in next year’s draft and the size of their bonus pool.

Consider that the difference between picking, for example, 15th and 19th last year was not only four fewer players on the board, it was also $550,000 in bonus pool space. Over the course of the first ten rounds that comprise the bonus pool, you could add in another $300,000, for a total difference of $850,000. If you follow the draft closely in this era, that is a really significant amount, and could absolutely be enough not only to land a couple extra quality prospects, but also to change your entire draft strategy for the better.

Realistically, the Cubs aren’t going to pass the Phillies, who might win their final four games (Nationals, and then hosting the Marlins for three), but who hold the tiebreaker over the Cubs. The only way the Cubs could pass the Phillies is if the Phillies win out and the Cubs lose out. I suppose it’s possible, but I do think the Cubs are going to squeak out a win eventually …

Passing the Diamondbacks (who host the woeful Padres for the final series of the year) is definitely possible. The Red Sox host the Orioles (sweet) and the Mets host the Braves (who might be resting?).

So, when it comes to the competitive long-term stuff, you have your marching orders the next four days: it would be better for the Cubs if they did not do so much winning, and the Diamondbacks, Red Sox, and Mets are your current favorite teams.