What constitutes “the right opportunity?” I’ll be thinking about the answer to that question all day, because apparently that’s what it’ll take to get David Ross back into a big league dugout as a manager.

Yes. The rumors are now a thing that have life. We’ve finally left the barstools, Twitter threads, and text groups to reach the lips of Ross, himself. Away we go.

To be sure, Jed Hoyer tried his best to squash this conversation last week and Theo Epstein is absolutely not talking right now, but with the unexpectedly rapid collapse of the Cubs drawing this conversation to our attention sooner than expected, we’ve finally arrived: Joe Maddon’s contract is expiring after this weekend and David Ross, a former Cubs catcher and current member of the Cubs front office, has been a long-time heavily-rumored candidate to replace Maddon. We gotta talk about this at some point, because there’s a lot of fit here, especially in an era where guys with Ross’s pedigree and background tend to be among the first considerations for major managerial openings.

But before we could even start to talk about whether Ross it the right guy for the Cubs, there’s a really important precursor question: is it even what Ross wants?

Well, like we said, now we get to hear it straight from the man, himself. And he said yes … if it’s the right opportunity.

“It’s gonna have to be the right opportunity to come back, for me,” Ross told Mark Carman this week on the On The Mark podcast. “For the most part, I live a pretty good life. The TV stuff is really fun. To call baseball games … I’ve got 50 days with ESPN that I work. I get to poke my head into the draft and go to Spring Training with the Cubs, and be a part of cool events in Chicago like this.”

Ross went onto explain that he’s got a family with young children at home and that when you have to “give up and sacrifice family time, it’s gotta be worth it.”

Of course, he also mentioned how much of a huge honor it *already is* to be included in this conversation and that, actually, yeah it is something he wants to do: “Do I one day have an itch to manage? That’s definitely crossed my mind with all the rumors that fly around,” he said. “And do I want to put my stamp on a team and the things I believe in? Of course. You see things, even as a casual fan, you start to want to kinda do things your way.”

So where does that leave us? Well, here are the facts: (1) Joe Maddon’s contract is expiring, (2) David Ross is an oft-rumored candidate for the job and has been for a while, (3) David Ross does want to manage one day (don’t take this part for granted, some guys say they’d rather not), but (4) he’d only do it if it were the right situation/opportunity. Which leads us necessarily out of the fact-based part of the conversation and into the speculative side.

So let’s ask ourselves: is this the right situation for Ross?

Well, on the one hand, sure! Of course it is! It’s obvious, right?

David Ross was a long-time big league player who wrapped things up with the Cubs, which obviously isn’t necessary, but certainly doesn’t hurt. And he was also a catcher, which is often considered the one position most suited for the role. We also already know from personal experience that Ross has grown into significant leadership qualities as a member of this organization, in particular, and has a generally good head on his shoulders. Also, since  he played in Chicago fairly recently, he therefore already knows a lot of the players on this roster (which could ease the transition to come). That’s not nothing.

There is also his comfort already in working with the front office, which is going to want the manager to be, among other things, a smooth conduit between the front office and the players.

Ross is also beloved by the city (… for now) and mentioned in *this interview* how he enjoys going to Spring Training with the Cubs and doing events in Chicago. From where I’m sitting, that sure adds plenty of weight to the “right opportunity” side of the scale.

But there is another hand, as there always is when you set up the whole “on the one hand” thing.

Ross would be a first-time manager, and despite how highly you or I may personally think of him, that’ll necessarily come with some challenges. And unfortunately, I’m not sure a team like the Chicago Cubs – fresh off back-to-back excruciating division losses against enormous expectations – is going to be the easiest place to figure those things out. And there’s also that whole “beloved by the city” thing. Ross may well have a nice, long leash at the outset of his career, but how long will that last when he starts making bullpen decisions with which you don’t agree? Is that goodwill something he will want to give up? Is it something you want to give up (i.e. are you willing to risk your positive memories of Ross for this?). Like moving in with your best friend, hiring Ross might be a better idea in theory.

And then this swirls around my head: Are we being objective here? Is Ross really the right fit, or are we so desperate to rekindle the magic of 2016 after three straight disappointing seasons? Maybe Ross can fan the flames for the first couple months or even seasons, but how long until we realize that is was just because we like him. And more importantly, I wonder if we’d be best leaving 2016 in the past and moving forward on purpose. This team was so clearly crippled by the expectations of the past and having a specter from that time around, like Ross, might only serve to remind us of, the front office, and the team of what never was. 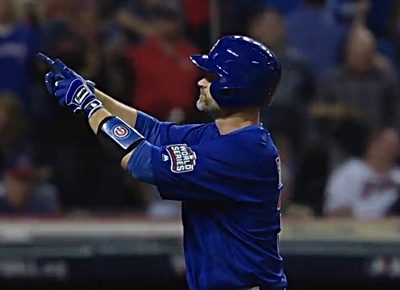 I’m not saying I definitely feel that way – and, again, I think Ross is uniquely fantastic – but that’s what’s swirling around my head. We’re just starting this conversation.

Fortunately, we still have some time to think about this, because while the team (and future manager) will want a decision as soon as possible, it’s not like this has to be resolved on Day 1 without Maddon, if there indeed a separation coming after this weekend. The manager isn’t the GM or President. The team can go on for at least a little in the offseason while without one (although, you would want him in place before the start of free agency, for what I think are fairly obvious recruitment/certainty reasons).

In any case, you can consider this chapter officially open now that Ross has commented on the rumors and indicated his “itch” to become a manager someday in the right situation. And know this: regardless of what happens with either guy, the Cubs could probably do a whole lot worse than another year of Joe Maddon or the first year of David Ross.