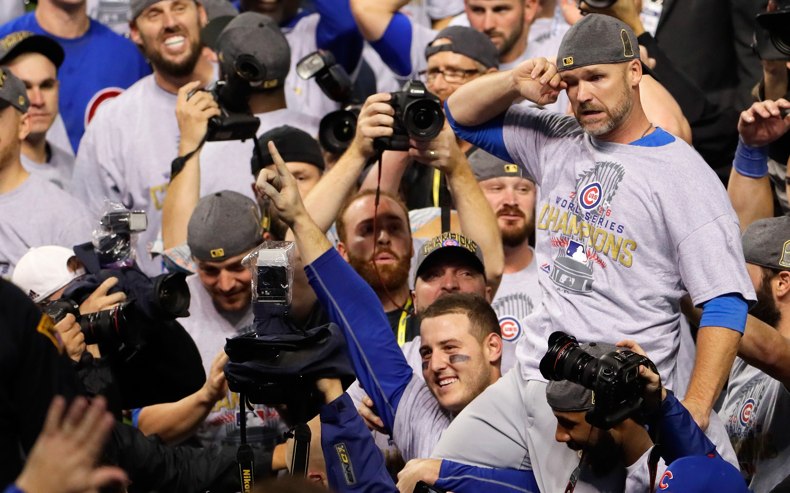 Well, then. If there were questions about whether David Ross would have even an initial level of interest in taking over as the manager of the Chicago Cubs, I think we can say that initial level has definitely been answered.

Speaking tonight on ESPN’s Baseball Tonight, the part-time TV analyst/part-time Cubs front office member made it very clear that, while he might still have some things to think about if the conversation comes, he definitely wants to get that phone call from the Cubs.

“I think it’s one of the best jobs in baseball,” Ross said of the Cubs’ managerial job, per ESPN. “I’ve got a lot of close ties with those guys. I think the interest would be there. I think my heart is drawn to that dugout a little bit.

“The rumors are flattering. It makes you think about a lot of things. I’ve got a nice job here at ESPN that I enjoy and gives me a lot of free time with my three kids …. I’ve got a lot of thinking to do if this gets presented to me as everyone says will happen. I’m sure waiting for that phone call.”

To be sure, Ross isn’t saying he desperately wants this job and would accept on the spot if the Cubs come calling, but he’s also not even remotely shying away from the rumors and speculation, which kicked up in full before Joe Maddon’s time was even up. He clearly does want to have the conversation.

We can’t forget that, even as Ross does enjoy his time away from the full-time grind of the game – he has a family – he was long regarded as a future manager, and there was a reason the Cubs’ front office sought to hang onto him in whatever advisory/assistant capacity they could after he retired. It’s so early in this process that I think it would be foolish to regard anyone as a favorite for the job, but I do think that Ross should not be excluded from consideration simply because he’d be a rookie manager and because he’s been a TV analyst for a couple years. Aaron Boone sure is having some success with the Yankees, no?

This isn’t *just* about Ross being a sentimental candidate.

Much, much more on this in the coming weeks. If the Cubs are interested in interviewing anyone on a playoff team, this process may not proceed super quickly, so just keep that in mind.