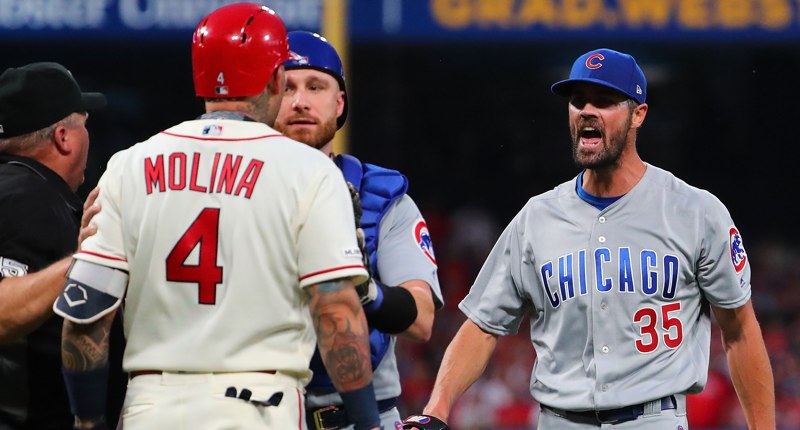 Tricky schedule today, both with the early game and the expected Joe Maddon news. I also have some family stuff going on, so I don’t have a lot of time right now. Gotta push through these Bullets quickly, with more on the specifics coming later …

When asked if he’d like to be back with Cubs, Nick Castellanos replied: “What do you think?”

Said the past two months with Chicago taught him a lot about himself. Raved about Cubs fans and the talent in the room. Felt the heightened pressure/expectations brought best out of him.

Kintzler on the Cubs-Cards benches-clearing incident:

"I dunno, I thought it was stupid. Maybe Yadi's trying to fire his team up. The guy's smart, he knows what he's doing. I was in the hot tub, so I didn't really know what was happening. I should've run out with my sliders on."

"I just liked that they weren't gonna celebrate with us tonight, so they gotta wait another day. It's all in competitive nature, especially with benches clearing and all that stuff and the fact that Yadi is up. It just makes it a little more fun."

Brandon Kintzler on wagging his finger after saving tonight’s Cubs win over the Cardinals.

(As for the chains, relievers were wearing them today as an inside joke aimed at James “Big Drip” Norwood.) pic.twitter.com/zOoOLCKlTd

I hope that wasn't the last time we see Pedro with the Cubs. Bring him back on a cheap deal and see what an offseason of rest can do. https://t.co/EMeHXQrVOk

Cubs rookie shortstop Nico Hoerner got a crash course in playing in the major leagues for the last three weeks.

But next week, Hoerner will return to Stanford to fulfill his bachelor’s degree requirements.https://t.co/3DcjgcBdpP