A Difficult Goodbye, Why Change Was Needed, Coaching Staff, and Other Cubs Bullets Skip to content 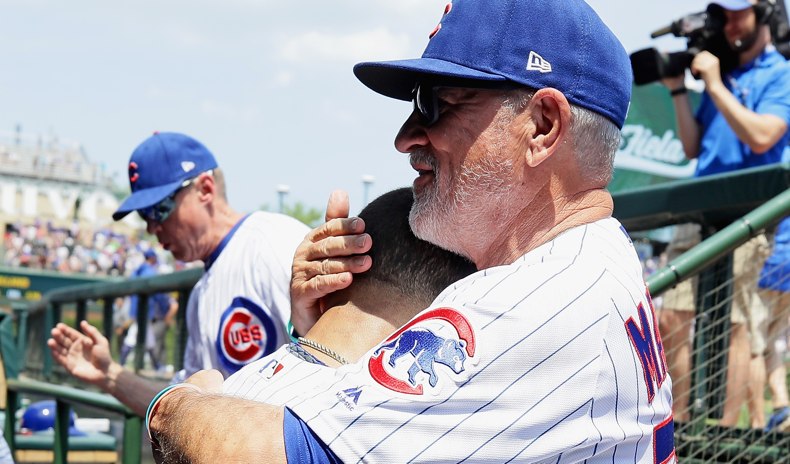 Today is going to be so weird. The transition from the season always is, but the Cubs have moved on from their manager, their President is having his end-of-season presser this afternoon, there are so many player threads now to check in on as the offseason arrives, and it’s an offseason that figures to be critically important. Please bear with me as I get my bearings a bit on how/what we want to hit today and in the coming days. Might take me a bit to get my rhythm – I’ve been doing this gig a long time, but this particular set of circumstances is entirely new to my coverage!

Maddon ended final presser by shaking each reporter’s hand. Said he enjoyed the exchange over the years.

Then had a message for anyone who has criticized his in-game moves: “I know what I believe, I know what I think and I know why I do things.”

And he went out with a bang… pic.twitter.com/vPfvPK3IiW

Spot on Jesse: Maddon's dismissal from the Cubs boils down to one sentence: He wasn't able to outmanage the mistakes the front office saddled him with.

The last #Cubs starting lineup managed by someone other than Joe Maddon pic.twitter.com/xinob6mAmd

I’ve been reminded yet again this week that we shouldn’t wait to tell people how they make life better or inspire us. So, @dgoold, you’re already a legend, but this elevates you to something else. Here’s to a long post-season this man will get to see. pic.twitter.com/LXaRmcTTfE

Which Cub made the last out of the season this decade:

The First-Place Bears Are Back: Bears 16, Vikings 6 https://t.co/KJNFVfyyWy

Like Everyone Else, Matt Nagy is Hoping to Get a Mitch Trubisky Shoulder Update Soon https://t.co/CKOY9o33O6 pic.twitter.com/NqIOsI75vU

Anyone know if using an opposing running back as a weapon is against the rules? Asking for a couple Nicks. pic.twitter.com/vY0WW6ZGkw