Brewers Let a Golden Opportunity Slip By Them, and I Am Trying to Be Very Mature (But Failing) Skip to content 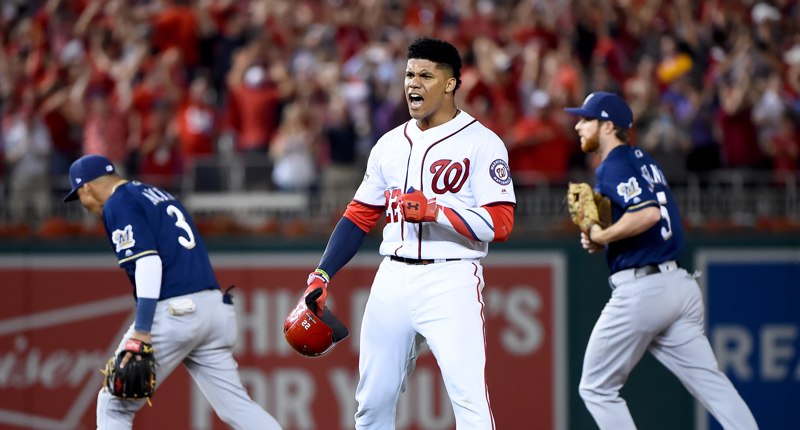 We’re going to be without meaningful baseball for a while, so to the extent the outcome of last night’s NL Wild Card Game entertains you, far be it from me to stop you from enjoying for a few hours longer.

The Brewers pounced on Max Scherzer early, with a Yasmani Grandal homer and an Eric Thames homer giving the Brewers a 3-0 lead. The offense was shut down from there, thanks to Scherzer, Stephen Strasburg, and Daniel Hudson (who is ridiculously dominant now?).

And the Nats’ own offense got a dinger from Trea Turner, setting up the 3-1 comeback in the 8th inning. Josh Hader loaded the bases with two outs, and then a play that’s going to be one of those playoff moments you remember for a long time:

This was only night one of the #postseason.

Just an incredible job of hitting by 20-year-old lefty Juan Soto – how do you do that off of Hader, man? – and then a brutal gaffe by rookie Trent Grisham. The ball looks like it took a funny hop, and he was being a little too aggressive. You can’t know that the Nats wouldn’t have scored more from there anyway if he’d fielded it cleanly … but yeah, that’s going to stick with him for a long time. Heck, you still can’t even say “Brant Brown” around Cubs fans.

The Brewers circled the wagons to defend Grisham, a rookie who helped fill in for the absence of Christian Yelich, and he made plain the sting of this one: “I was getting ready to throw to home. I came in a little off balance and it took a bit of a funky hop on me. It hurt. It wasn’t ideal. It’s not how you want your first playoff game to go. We expected to win. All kinds of thoughts and emotions are running through my head. It just stings right now.”

I do feel for that young man.

I’ll cop to feeling a little less for Hader, who is considerably more culpable in the loss:

Josh Hader said it was his poor command, not all the other stuff, that led to disastrous 8th inning. pic.twitter.com/Tk1DagtsJG

Other bits of dark and petty enjoyment for Cubs fans:

You hate to see it. pic.twitter.com/U6hsMv8BFh

Obviously I sorta make jokes, but I do think it can be very challenging to come back from something like this. Consider the month that the Brewers had, not only overcoming the Yelich injury, but getting so absurdly hot that they went from toast to a Wild Card spot. But they just barely missed out on winning the division because they couldn’t beat the Rockies. Then, they have THEIR guy on the mound in THE spot you’d want in the Wild Card Game, and not only does he blow it, but the guy filling in for Yelich misses a ball and it costs them the game.

Imagine if this were the Cubs. You’d feel like a golden opportunity passed you by, and you’d worry that next year won’t be as good, especially when you consider: Yelich will be coming back from a serious knee injury, Lorenzo Cain was very bad and is a year older, Ryan Braun is a year older, Yasmani Grandal is a free agent, Mike Moustakas is a free agent, and the farm system is barren.

Meanwhile, an enduring image for the sport: