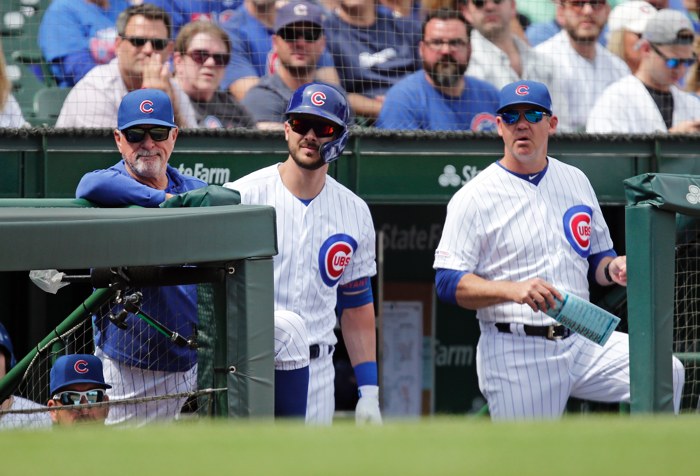 The Cubs’ managerial search has entered the interview phase, with Mark Loretta getting his interview this past week, and David Ross, Will Venable, and Joe Girardi coming next week. Others to be named? I think it’s likely.

More from the managerial circuit …

I thinkg Joe Girardi also fits in well with #Cubs , not sure he makes sense with @NewYorkMets because of ownership – its actually a tougher job than #Yankees says @pgammo

Joe Girardi, who has Cubs interview coming up, is said keenly interested in Mets as well. Both big market teams bring chance to win and he has roots in both cities. One thing: Cubs appear likely to stay in-house, Mets wide open. Also, clamoring for Joe G among Mets fans.

“Joe is passionate and he’s competitive and he’s going to do what he believes needs to be done. I know one thing: There will never be an issue in the clubhouse, in the dugout with the accountability and that is what this game is losing now. You are losing accountability. Guys need to be told the truth. They don’t need to be told how great they are all the time. They need to be challenged — in the right way, not in a derogatory way — and that is what [Girardi] will do. He has the players’ backs, but if there is an issue he addresses it. I don’t think Joe is wound too tight.”

Padres are doing background work on Joe Maddon. While a lot of folks are figuring Maddon is ticketed for the Angels, the Padres aren’t assuming it.