Atlanta Braves to Curtail "The Chop" Tonight ... Kinda, But Not Really Skip to content 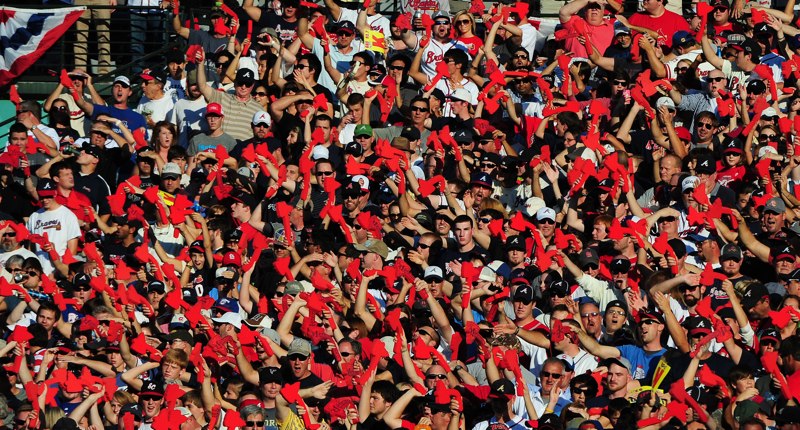 The Atlanta Braves have taken steps before tonight’s NLDS Game Five against the St. Louis Cardinals to limit the impact of the “tomahawk chop,” a physical and audible chant in which fans mimic some history-adjacent idea of what Native Americans were like.

The #Braves have discontinued the practice of handing out foam tomahawks after the comments made by #STLCards pitcher Ryan Helsley, a Cherokee Nation member. Here is their statement: pic.twitter.com/NjioUNxsS0

As fans arrive this afternoon at SunTrust Park, they'll notice something different about their seats, something missing, something subtle: The foam tomahawks placed on every seat before games 1 and 2 of #NLDS won't be there. More here: https://t.co/nIFejQIMI5 #Cardinals #Braves

Even as the chop has been problematic for years, it is only now in the spotlight because Helsley, a rookie who is a member of the Cherokee Nation, spoke out recently about to the St. Louis Post-Dispatch: “I think it’s a misrepresentation of the Cherokee people or Native Americans in general. Just depicts them in this kind of caveman-type people way who aren’t intellectual. They are a lot more than that. It’s not me being offended by the whole mascot thing. It’s not. It’s about the misconception of us, the Native Americans, and it devalues us and how we’re perceived in that way, or used as mascots. The Redskins and stuff like that. That’s the disappointing part. That stuff like this still goes on. It’s just disrespectful, I think.”

Of course, the fact that the Braves specifically called out Helsley in their explanation, and will limit encouraging the chop *only* when he’s in the game, tells you that this move is entirely about public relations for them, not some consideration of morality. They know it would look awful if their stadium was full of tomahawk chopping fans when there’s a Native American baseball player on the mound – one who has already aptly pointed out the grossness of the chop.

Imagine the cowardice of admitting that the chop is bad … but only when there’s literally a Native American on the field.

(Also, by doing it this way, the Braves have arguably ensured that if Helsley does get into the game, the chop might be louder and more prolific than ever. They just made him the bad guy to a large group of their fans.)

The chant is a gross caricature, and even if it were true that very few people are offended, it still risks negatively impacting our long-term development of empathy for folks who are different than we are – I sure as hell don’t want my kids doing it. Native Americans aren’t some chop. They aren’t just some fighting mascot to be enjoyed as part of a large American business enterprise. They’re people who went through and extraordinary pile of horrible shit, and I’m not too keen on acting like it was all just tomahawk chops and whooping chants.

And if you’re sad about the chop going away, my advice is to go ahead and cry on your big baby diaper.