Did the League Already Fix the Juiced Ball for the Postseason? More Dodgers Heartache, and Other Cubs Bullets Skip to content 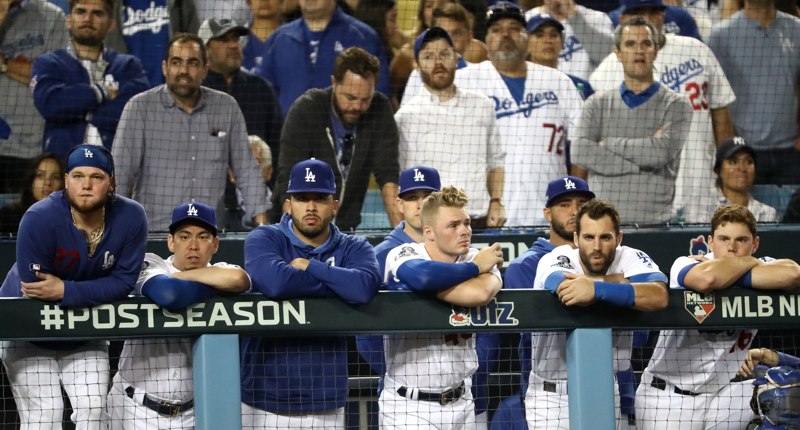 I’m still thinking about how the Braves gave up 10 RUNS in the FIRST INNING of a DO-OR-DIE playoff game. Credit to the Cardinals and all that, but good lord. That’s something you just won’t see again any time soon.

When you see the three typing dots from your crush…and then they disappear pic.twitter.com/OGOs3Arqci

Air resistance in the playoffs has shot up to the highest level since 2016, causing fewer homers. Multiple lines of evidence suggest that the postseason baseball is totally different than the one used in the regular season. https://t.co/U4NBMd05k9 pic.twitter.com/bdIl09blQF

That includes a few no-doubters, including a couple in the Dodgers-Nats series. Drag has a much more significant effect on the marginal home run cases, though–the balls between 20-70%ish home run probability. These just aren't carrying like they used to.

The speed and magnitude of the change and the timing of it aligning so perfectly with the playoffs makes it much harder to believe this was a random manufacturing accident. In the past, drag has drifted around slowly during the course of the season, but this was massive & abrupt.

Dave Roberts said the decision for Clayton Kershaw to start the 8th was not an “analytic question.” Kershaw, he said, “is a guy I believe in.” Roberts indicated plan was for Kershaw to face Rendon and Soto, before bringing in Maeda for #Nats right-handers.

I don't understand sticking with Kelly for a second inning.

Which fanbase is in a better spot currently – Cubs or Dodgers?

Cubs didn't make playoffs this year and have had back-to-back disappointing ends to seasons. But they have 2016…

Dodgers have a bright future + amazing roster, made it to back-to-back WS, but no ring since 1988.

Cubs are weighing a couple big job changes — possible reassignments, not firings — on the draft/player development side.

Busy day for Cubs in AFL. Here’s the list:

He’s induced 17 swings and misses and 8 strikeouts on the pitch, which both lead all of baseball. https://t.co/zfSSLlcFwH

This is the Nationals' fifth NLDS appearance.

Here’s what Jack Flaherty had to say about the pitch that hit Ronald Acuña Jr. in the bottom of the fifth: #stlcards pic.twitter.com/lw6C0i3JIw