Realistically, Maybe Not "Everyone" on the Cubs Should Be Available In Trade This Offseason Skip to content 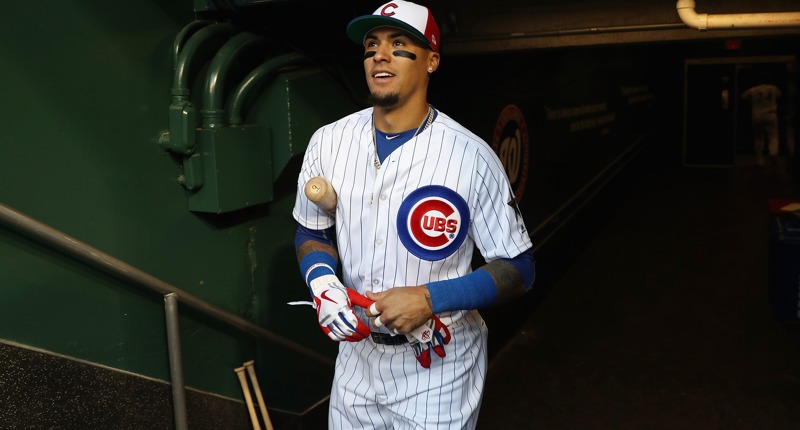 The well-established mandate for the Cubs this offseason – from the fans, to the front office, to ownership – is clear and unanimous: there needs to be significant changes to the organization, including the big league roster, with no stone left unturned and no asset too valuable to cash in.

Be it Kris Bryant, Javy Baez, Willson Contreras, or anyone else, every player is available and every move is on the table. I’ve said it myself plenty of times already, and the Cubs have certainly started the process themselves with respect to (not retaining) manager Joe Maddon.

Anything can be considered, and everyone is available.

… but is that all actually correct? Like, in real reality? Is *everyone* really on the table?

I’m not so sure it’s that simple, at least with respect to one player in particular. The picture tips you off, but let me get there. First, I want to speak a little more broadly about how the Cubs can trade from the big league roster and stay competitive.

When it comes to any significant trades off of the big league roster and any attendant free agent signings this winter, I’m hoping the front office follows a transactional pattern they followed after the 2015 season with the well-coordinated Starlin Castro trade and Ben Zobrist free-agent signing. In other words: I hope, if the Cubs trade a contributor they have under control, they coordinate that with a corresponding use of financial might to replace that player on the roster for the upcoming season. It’ll be two separate moves, but it should almost feel like one.

And with more attractive trade pieces than Starlin Castro and some cash to spend, the Cubs can effectively shake the big league roster up, while also replenishing the organization with young talent (prospects or otherwise), and remaining competitive in 2020.

But this kind of combination of moves is obviously extremely difficult to pull off. And even if they do manage to make it work, trading one or more of their more proven and cheaper core players for younger talent and/or prospects while spending cash on free agents is hardly a risk-free endeavor.

Fortunately, there’s one thing working in Cubs favor this time around that wasn’t as available during the Castro/Zobrist combo-move: roster flexibility.

I tend to believe the Cubs front office went into that 2015-2016 offseason with the express intentions of trading Starlin Castro and signing Ben Zobrist, which is a very specific plan. But the scope needn’t be so narrow this time around, even if you are working the trade-and-sign coordination. Under some fairly unique circumstances (everyone is theoretically available, right?), the Cubs could dangle a number of different and extremely attractive player packages to see which returns the greatest value to the team, relative to the value they’d otherwise deliver on the field next season (as compared to what the Cubs could acquire to fill that spot). It’s all a big net calculus.

For example, trading Kris Bryant might return the biggest package, but trading Kyle Schwarber could net the best return if the increase in productivity (PLUS the prospect return) is clearly better for the organization. And implicit in that example is that the players the Cubs could trade this winter are each more valuable than Castro was back in 2016. Again, that is to say, the Cubs are in a much better spot this time around.

But remember: trading guys away is only half the battle.

The Cubs must be able to replace whomever they trade with a big league ready player who can keep them in contention next season. This isn’t a rebuild. That cannot be the plan. And that’s where things get trickier.

I’m confident, based on what’s available in free agency, what tends to be available in trade, and what’s already in the organization, that any corner infielder or outfielder could be replaced by someone else. No, you can’t replace Kris Bryant’s production directly (unless you sign Anthony Rendon), but you could theoretically embark down this road knowing that you would be willing to fill the spot with a lesser bat if the *NET* upgrade to the organization was a win (including what you get in return, and how you deploy the money elsewhere on the big league roster). The opportunity may not actually present itself, but in terms of where you can deploy players positionally, it’s obviously possible.

But the same isn’t true for every position – namely, it’s tougher to replace guys who play in the middle of the field, specifically center field, catcher, and shortstop.

However, of those three spots, center field is probably the easiest to cover, either with internal candidates like Jason Heyward, Ian Happ, or Albert Almora Jr., or free agents like Japanese All-Star Shogo Akiyama. Even in trade, finding someone who could play center field isn’t the tallest task for a front office.

Typically, catcher would be one of the hardest to replace with an effective and positive-impact, big-league ready player, but if the Cubs were to consider trading Willson Contreras (because the return is too overwhelming to pass up, for example), they could give more time to Victor Caratini, who proved to be more than a capable back-up throughout the season, and pair him with a veteran free agent. Alternatively, Yasmani Grandal is an impact free agent who just posted yet another 5.0+ WAR season with excellent framing, offensive, and defensive numbers. He also comes directly from a big NL Central rival, which can’t be overlooked. Point here being: if the Cubs traded Contreras, catcher wouldn’t necessarily be a black hole for the Cubs next season.

So, center field and catcher are theoretical, realistic trade spots. I cannot say the same for shortstop.

Although I didn’t feel this way at the start of the offseason – I was just doing the generic “everyone is available” thinking – I now believe Javy Baez is darn-near close to just flat-out untradable. (Note, we’re not talking about trade likelihood here, because there are several guys who are unlikely to be traded. We’re just talking about availability.)

Internally, the Cubs do not have a reasonable option to fill the gap at the start of the 2020 season. Addison Russell has not done anything to make you think he’s deserving of the full-time starter job at shortstop. Could he fill in if the Cubs needed it? Sure. Will he even be around next year for the Cubs after the tender deadline? Not a lock.

Nico Hoerner, who filled in admirably, might not be a shortstop long-term. And even if you do think Hoerner does have the glove to cover shortstop for a playoff-caliber team, we don’t yet know what his bat will be, especially immediately in 2020. Hoerner is not guaranteed to make the team out of Spring Training next year (remember, he skipped Triple-A entirely and was forced into the big leagues out of necessity more than anything else), and may need considerable additional developmental time. Any other internal options for the Cubs would be strictly fill-in types with warts (David Bote is probably well below average there defensively, Zack Short may not have a big-league bat, etc.).

Without any other big-league ready shortstops in the system, a high-quality, playoff-caliber internal replacement for Baez is pretty much out of the question.

Free agency isn’t any better. Here’s a look at the available free agent shortstops this winter:

Maybe a useful guy or two. Maybe you bet on a huge bounceback from Gregorius. But that is not a compelling list of options.

And, of course, if you’re trading an impact big-league shortstop, it’s very unlikely that the return you’ll get is another impactful big-league shortstop, because that team would probably just roll the dice with that guy instead of using him (and other players) as currency to acquire Baez.

So even if you forget about all the fan-related reasons not to trade Javy Baez this winter (of which there are many! El Mago!!!), I think there’s an argument to be made that he’s more or less untouchable for any Cubs team that hopes to compete next season. And he may be the only guy on the roster to carry that distinction.