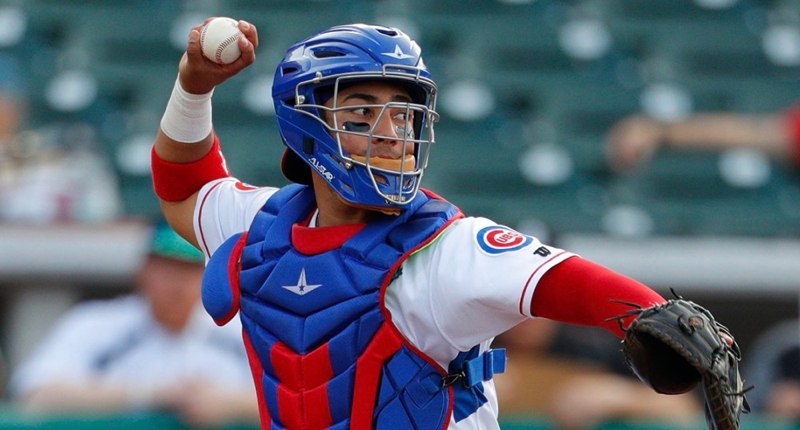 I can’t vouch for the extent to which receiving/framing factors into this award for minor league catchers (I truly don’t know), but Pereda did show off excellent other defensive skills this year and also was a monster at throwing out runners (50% caught!!!).

Behind the dish, from the @Cubs system…

Pereda, 23, emerged as an eyebrow-raiser of a sleeper prospect last year, posting a .272.347/.363 line at High-A Myrtle Beach (104 wRC+), pairing it with improving defensive work. The power wasn’t there, but that’s often the last thing to come for catching prospects. Moreover, he was walking 10.3% of the time, while striking out just 13.7% of the time – a huge drop from his full-season debut at Low-A the year before. It was a very promising season.

Because he was still so low level, the Cubs left Pereda – then 22 – unprotected from the Rule 5 Draft, but he went unselected and was promoted to AA to open this season. All of that is not unlike fellow Venezuelan Willson Contreras, who was also 22 when he was showing modest signs at High-A back in 2014. The comparisons were always unfair, but they were understandable when the two had so much in common superficially.

The big difference is that, whereas Contreras absolutely exploded at AA the next year, Pereda seemed to take a step back, hitting just .241/.336/.305. He still showed great plate discipline (12.3% BB, 13.8% K), but he simply didn’t hit the ball consistently with authority in the air. Thus, his BABIP shrank to just .280, his groundball rate climbed to 53.7%, and his HR/FB ratio was just 2.4%. Those are all mighty ugly offensive indicators, and point to a guy who is really good at taking pitches and putting the bat on the ball, but who, without adjustments, would get eaten alive by more experienced pitching with better command. He’d be softly hitting their pitches again and again, the strikeout rate would also climb a touch, and the walk rate would drop. We’ve seen this offensive profile before, and without consistent hard contact, once you get to AAA/MLB, the rest just doesn’t matter.

All that said, the bones are there for a guy to take a step forward at the plate – especially a catching prospect for whom hard contact and power is often the last piece to develop anyway. It wouldn’t at all be surprising to see a guy with Pereda’s profile become an average big league hitter in a few years. Pair that with a plus glove, and boom, you’ve got yourself an excellent back-up/rotational catcher.

The rub? Because Pereda is set to be a minor league free agent, the Cubs may not have the time necessary to develop him that way. They could choose now to add him to the 40-man roster, thus keeping him for his option years, but they also have to add catcher Miguel Amaya to the 40-man this offseason to protect him from the Rule 5 Draft. And they also have to make a decision on catcher P.J. Higgins, who showed a plus bat at AA and AAA this year, while also being regarded as an excellent defensive catcher. I don’t think the Cubs are going to have five catchers on their 40-man roster.

Maybe the Cubs roll the dice on Higgins and instead add Pereda. Or maybe the Cubs roll the dice on Pereda in the Rule 5 Draft by first signing him to another minor league contract if he’s open to it (he’d still be available in the Rule 5). I have a very hard time seeing him selected in the Rule 5, given his lack of success at the plate this past year at only AA – could you really bring him on board as your back-up catcher? Even if you’re a rebuilding club, is the possible realistic upside (nice big league back-up) worth it?

Tentatively, I hope the Cubs are able to sign Pereda to another minor league deal, and then take their chances with the Rule 5. This is a guy you WANT to keep in your system, especially if he’s this strong of a defender.