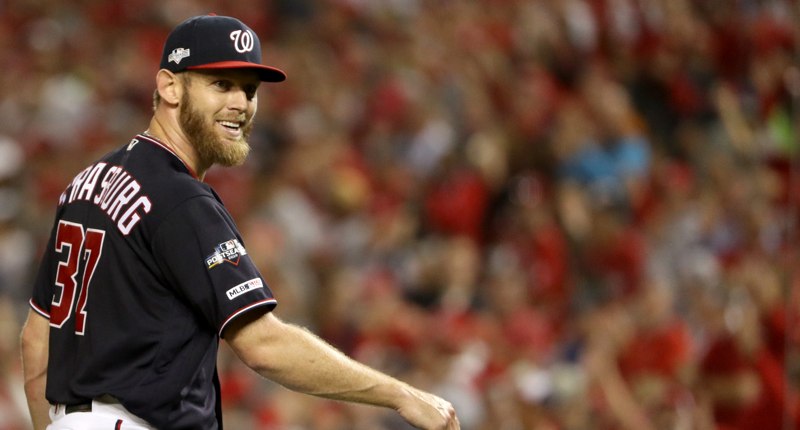 The Nationals owned the Cardinals once again, winning NLCS Game 3 by an 8-1 margin, and going up 3-0 in the series.

Stephen Strasburg was otherworldly, and the Nationals’ bats were relentless, even against Jack Flaherty.

The Cardinals are now almost certainly toast, whether it’s a sweep tonight against Patrick Corbin, or whether they eventually have to get crushed by Max Scherzer (or Anibal Sanchez!) again.

It’ll be interesting to see how this year is ultimately received by Cardinals fans, who were apparently already apathetic about showing up for the NLCS games. I would have thought this would feel a very successful year, much as 2015 did for the Cubs despite an NLCS sweep, but I’m not so sure it will be the case for a Cardinals crew that is wringing out the last useful moments from guys like Adam Wainwright, Matt Carpenter, and Yadi Molina.

In the end, this was going to be a very good year for the Cardinals to make a run, and although they do have a good bit of young talent, they also have an older core that will be older still next year.

As for Strasburg, he keeps doing stuff like this in the postseason:

Stephen Strasburg is the first pitcher in MLB history with 0 BB, 0 ER and 12+ K in a postseason game.

Players with 10+ Ks in 4 of their first 7 #postseason starts:

He trails only Sandy Koufax (0.95) and Christy Mathewson (1.06). pic.twitter.com/cZ5uRHqhwB

It’s looking more and more likely that he does opt out of the four years and $100 million remaining on his contract, as he could pretty clearly beat that by a touch in free agency. Whether he actually *GOES* to free agency remains to be seen, as I’d think it more likely that he opts out, but simply gets another year or two tacked onto his deal by the Nationals.

Of course, that could still have a market impact, because it might make the Nationals a little less able to be aggressive in retaining Anthony Rendon.