Ian Happ Discusses His Trip to Iowa, Mid-Season Adjustments, Strong Finish, and More ... With Me! | Bleacher Nation Skip to content 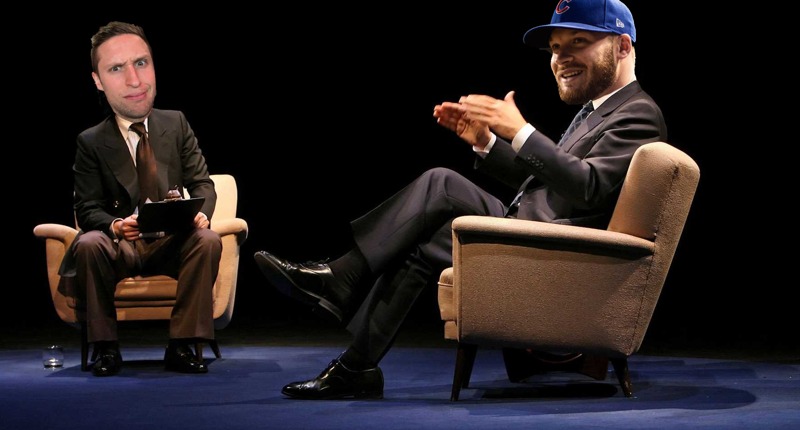 Did you notice the Cubs weren’t in the postseason this year? It’s no big deal, though. Their invitation must’ve gotten lost in the mail. They’ll totally be invited next year. It’s fine. Actually, they didn’t even wanna go this year. They were, like, really busy, and actually had like lots of other playoffs to attend. Which one was yours, again? Are you buying any of this? I’m dead inside.

Indeed, it sucks to miss the party – and always will – but the Cubs’ October-absence did at least leave me with enough time to start my own podcast, creatively titled “Michael Cerami’s Podcast!” And that’s fun. We’ve already had a ton of great guests so far (Brett Taylor, Joel Murray, David Kaplan, David DeJesus, Jordan Bastian) and we have a few more to go yet.

But with love and respect to each of them, I was particularly excited for my most recent drop-in … Ian Happ! Like, the Cubs player, Ian Happ. He’s on the Cubs. And I got to interview him. He let me ask him questions and then he answered those questions. The Cubs player. The guy on the Cubs. Ian Happ.

Listen to “Ian Happ” on Spreaker.

My initial ties to Happ began when he made my jump in Lake Michigan after hitting a home run on the first pitch of the 2018 season, but continued throughout this season, when I loudly (and often) stumped for his talent, abilities, and potential impact. Happ, of course, was forced into the Minors to start the year, but eventually made a brilliant return to the big leagues, where he hit a career best .264/.333/.564 (127 wRC+) over 156 plate appearances with a career-low 25.0% strikeout rate.

Happ hit an even better .311/.348/.672 (155 wRC+) in the month of September, and finished out the season as the National League player of the week. Yeah. It was pretty awesome (and even a little vindicating).

As a 25-year-old, switch-hitting, multi-positional bat with power and speed and just barely over 300 games in the big leagues, 2019 was a transformative season for Happ. The extent to which his talent will ever *consistently* match his production remains dependent on the amount and quality of contact he’s able to make, but this year was a good step forward for him in that respect. Which brings me to my podcast and some specific revelations made therein.

Here’s a little taste of Happ’s response, when I asked him if the Cubs were looking for him to make specific changes at Iowa (even at the expense of production) or if simply dominating was the plan. Emphasis mine:

Happ: No. It’s really difficult, because when you go down [to the minors] like that, they’re looking for some specific changes and you’re honestly not sure what your path is to get back up …. In some sense, I think they want you to dominate that level, because it’s not the big leagues. And if you’ve had success in the big leagues, it … shouldn’t be an issue to dominate a level that’s below the big league level.

[But] there’s another part of it that they want you to make some changes. They want to see some different things. So if I were to go down and dominate at the Triple-A level, but strikeout 30-45% of the time, would that have been an indicator that there wouldn’t have been big league success? I’m not sure.

And I don’t know how that would have gone, but I chose to try to make some big adjustments and try to work on some things. So I had, I don’t know, three or four different two-three week periods, when I was there that I was working on something specific and at some point you have to try to get results, because you’re not going to get back up if you don’t, no matter what the ancillary numbers say. So that was kinda of … until July when I said you know what, I’m just gonna try to put at-bats together and play the game. That was what I was working on early.

First of all, good on Happ for choosing to value adjustments to his approach and swing over simply dominating the Triple-A level. That must’ve be an incredibly difficult decision to make, when dominating right away might have otherwise gotten him back up to the big leagues sooner.

But more importantly, how about that confirmation of EXACTLY what we thought was happening at that time? Remember how we broke his Minor League efforts into 6 15-game groups? 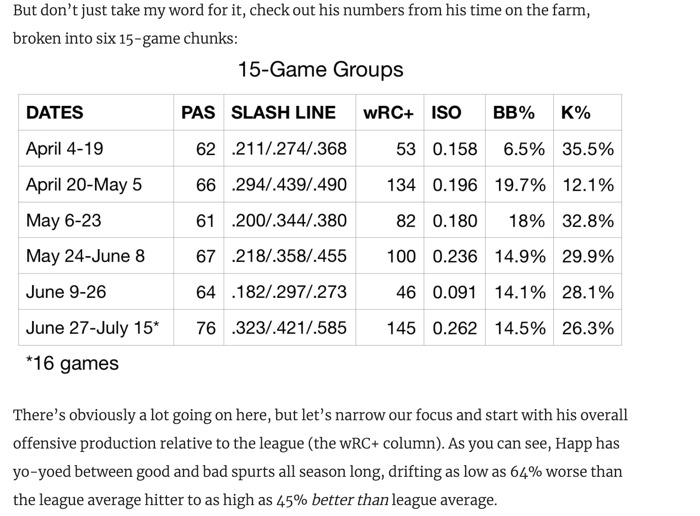 We could see in the numbers what Happ has now confirmed: he was working on things in two-to-three weeks spurts (a.k.a. 15-game groups?), which often impacted his actual production, before he decided to put everything together in July and just let himself dominate. The data is clear and now the narrative has been confirmed. That’s freakin’ awesome.

And it’s also an important reminder that the numbers don’t always tell the whole story. Sometimes, guys are working on very specific things (particularly in the minors and/or Spring Training) and you can’t let that cloud your evaluation. In any case, I’m glad to see Happ’s dedication to his craft in the minors, even at the expense of appearance. It’s that kind of work ethic that led to his NL Player of the Week honors in 2019 and will lead to great production in 2020 and beyond.

You can find my podcast (for free!) on Apple Podcasts, Google Podcasts, Spotify, and right here. I’m doing only 10 episodes, so there’s only four left!