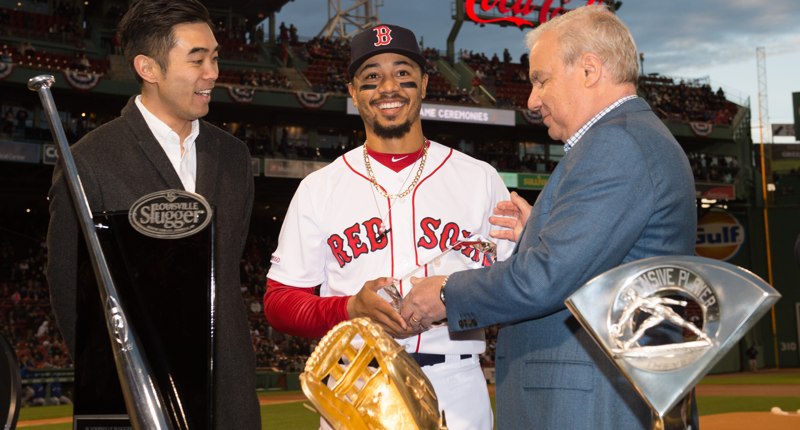 In what will undoubtedly become one of the biggest storylines in the early part of the offseason, the Boston Red Sox are trying to get back under the luxury tax level this offseason, despite a roster loaded with expensive stars. That means, among others, there is going to be strong consideration given to trading Mookie Betts in his final year before free agency.

With that in mind, John Tomase writes about five possible landing spots for Betts if he is indeed traded, and, together with the Braves, Dodgers, Padres, and White Sox, there are the Cubs:

“Oh, man, are the Cubs at a crossroads. After winning it all in 2016, they have systematically dismantled their farm system while recklessly chasing one more title with the Kris Bryant-Anthony Rizzo-Javier Baez core.

That bill is about to come due in a big way, with the core trio expiring after the 2021 season. The Cubs are locked in to some terrible contracts, whether it’s $184 million for underachieving right fielder Jason Heyward or $126 million for fragile right-hander Yu Darvish.

They’d have to get creative to fit Betts for even one year since the top 15 players on their roster will count for more than $200 million next year. Their farm system is also pretty wiped out, but don’t discount Theo Epstein, who drafted Betts in 2011 and has watched him blossom into a superstar from afar.

Going all in on one last title run is how the Cubs have gotten themselves into long-term trouble, but their window is slamming shut, and Betts could be a one-year difference maker before the reckoning.”

Although I’d point to some of the language there as being overly dramatic, I can’t argue with any of the overarching themes. If the Cubs wanted to keep going all out to win another one before their current window of contention (arguably) expires in two years, adding a guy like Mookie Betts would be about as good as it gets.

Since establishing himself as a regular, Betts has more or less alternated All-Star seasons with superstar seasons:

I don’t think you can realistically count on getting a 2018 performance from Betts in 2020 – the kind of performance where he could singlehandedly propel a barely-.500 team into the postseason. But I do think his track record is such that you can have a very high level of confidence he’ll give you great defense and baserunning, while putting up fantastic numbers at the plate. He hits for power while also taking his walks and rarely striking out, and he can still put up good numbers even when the BABIP takes its inevitable, periodic dips.

In other words, Betts is – even if you’re not talking about a magical year – an incredibly stabilizing presence in a lineup, while doing everything else that the sport requires very well.

But there are always buts, even with a best bet like Betts.

Trading for Mookie means you’re getting a star who is likely to give you something between an All-Star and superstar season in 2020, but that’s all you’re getting. Just one year. He’s a free agent after 2020, and the 27-year-old is no lock to sign a reasonable extension, especially with a new team. And for that 2020 season, you’re going to be paying him a very handsome salary: MLBTR projects a final arb salary of $27.7 million for Betts.

To be sure, if Betts were a free agent now, and wanted only a one-year deal for 2020, he’d get a whole lot more than $27.7 million. He might even top $40 or $45 million for a single season. But in the trade calculus, his huge salary (relatively speaking) in arbitration is going to seriously diminish his value.

Consider that Paul Goldschmidt made only $14.5 million in his final year before free agency, and when he was traded to the Cardinals, the Diamondbacks received two young players who weren’t locks to become even low-ceiling big league contributors (Luke Weaver and Carson Kelly) and a guy who barely made the Dbacks top 30 prospects this year (Andy Young).

Goldschmidt is not Betts, so don’t mistake me there. But he was a consistently very strong 5+ WAR performer, and he was going to make some $13 million *less* than Betts will. If a very good prospect is worth $8 to $10 million, it’s not hard to see how the ultimate packages might compare.

In the end, do I see the Cubs as a good fit for Betts? Well, I think it’s extremely easy to see the need and fit on what we expect the 2020 Cubs to look like. Betts is the *perfect* kind of bat the Cubs need, and he could easily slide into the defensive alignment one way or another. I also think it’s plausible that the Cubs could put together a reasonably enticing package for a single year of Betts (as could many other teams).

Do I think the Cubs are going to give up that package *AND* pay $27.7 million (or so) for a single year from a single player in a season they may not otherwise be inclined to go all out? That’s the part where I get a little closer to a sticking point. No question there are packages you’d be fine to see the Cubs give up for Betts, and no question that the payroll can be maneuvered to make fitting Betts doable (if the Cubs keep payroll around where it was this past year). But are the Cubs prepared to do the *other* things they’d need to do to justify such an addition? To add an impact starting pitcher? To add serious confidence to the bullpen? To really go 100% balls-to-the-wall for this window, even knowing it might mean an ugly rebuilding process looms in a year or two?

So I guess what I’m saying is not that I wouldn’t want to see the Cubs try to land Mookie Betts, it’s just that I’m not sure I see that move coordinating right now with what the Cubs might otherwise try to do (i.e., smoothing the transition from this window of contention to the next). I tend to think the Cubs would gladly take him, but I also tend to think they’d want to move out other salary in the deal (hard to do when the other team is explicitly trying to cut salary), and wouldn’t want to give up a lot of their top young talent.

The best version I could see would be the Cubs going after Betts now because he’s already their tip-top free agent target over the next three years, and they desperately want to get him in house to try to have a year to sell him on staying (in which case he would help them both now, and also to smooth that transition). But that version plays out *only* if the Cubs are planning to spend enormously over the next five to seven years (i.e., even more than they have been). Otherwise, you might get yourself Betts on a monster contract … but not a lot of championship-caliber talent around him.

What do I even say in conclusion here? I love Mookie Betts, and I’d love to see him on the Cubs. I think he would single-handedly make the 2020 Cubs a tremendously better team, regardless of what else they do this offseason. But I don’t know how realistic it is, given the state of everything, that the Cubs would be the top bidder for his services if he’s ultimately traded.