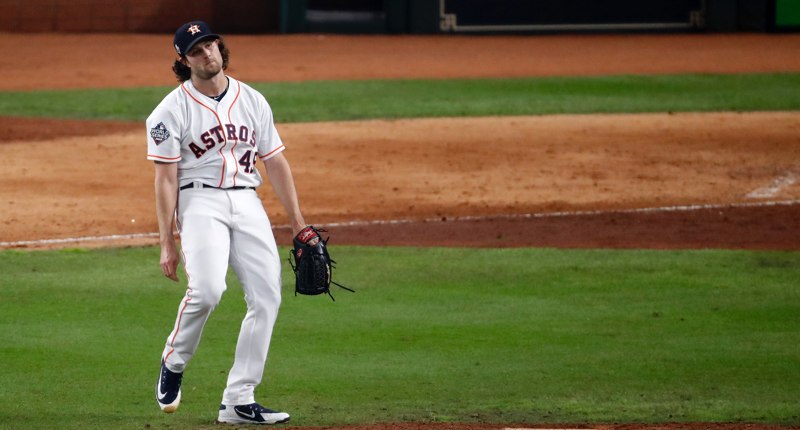 Hey, so that was a pretty awful 24 hours for the Houston Astros. Can’t say it bothers me.

On the field, the Astros got a rare dud from Gerrit Cole, who gave up five earned runs over his seven innings of work, yielding the Nationals all they’d need to hold onto a 5-4 win in Game One of the World Series.

The start was an extreme rarity for Cole, who remains at the tip-top of the free agent market:

He hadn’t lost since May 22. That was 5 months ago. He hadn’t thrown a single pitch while trailing since Sept. 2. That was almost 1,000 pitches ago.

But in October, stuff happens. And in Game 1 of the World Series, it happened to Gerrit Cole. My column..https://t.co/VoJUotOZ5e

Juan Soto had a huge game, including a MONSTER homer off of Cole, and he was getting dudes in the organization pumped. This is really cool:

It wasn’t quite the dominating Cole-versus-Scherzer we expected, but it was a fun game nonetheless. Of course, most folks in Eastern Time didn’t come anywhere close to the final innings because the game didn’t end until midnight on a Tuesday, but that’s something MLB is just gonna have to figure out whether they care or not.

So, anyway, that’s a loss for the Astros, and it seriously harms their chances of bringing home their second series win in three years. And that came after they’d done serious harm to their organizational reputation, which was already suspect when it came to putting winning above anything and everything else. And that’s gotten worse in the last few days.

As the club was celebrating their ALCS victory, and while closer Roberto Osuna was talking to the media, Houston Astros Assistant GM Brandon Taubman went off in a very specific, very disgusting way.

The events – coming against the backdrop of Osuna’s previous domestic violence suspension, which allowed the Astros to acquire him on a discount – were detailed at Sports Illustrated, and corroborated by multiple other witnesses:

During the Astros’ ALCS celebration, assistant GM Brandon Taubman yelled, half a dozen times, to three female reporters, “Thank God we got Osuna! I’m so f——— glad we got Osuna!” On a systemic problem, in Houston and across the league: https://t.co/8zyVwG2Lpo

So, that’s what happened. I can say that it happened – without the allegedly – because the Astros twice commented on the events, and did not deny in either case that it happened. Instead, they first tried and failed to smear the reporter, and then they tried to do a “sorry if you’re offended by my language” nothing apology. MLB is investigating, as they should. Because what it looks like is an organization whose culture is a giant eff you to the sport’s efforts to include women, to make everyone feel safe, and to take a meaningful stand against domestic violence.

Also, it’s reportedly even worse than that:

She has tweeted frequently on DV; he complained about her tweets offering info on DV hotlines when Roberto Osuna appeared in Astros games in 2018. My story: https://t.co/pjNptpOyIl

SI’s @stephapstein was one of them. When she wrote a column about it, the Astros said she made it up

But she was right. My NPR story on what drove Taubman:https://t.co/cNVpHLNsHI

That’s what the organization was circling the wagons around? Are you kidding me? He was *specifically* targeting a reporter because he didn’t like that she supported domestic violence causes in response to the Astros trading for Osuna? If accurate, that takes the disgust to an entirely new level, and the consequences should rain down not only on Taubman but on the Astros organization.

Meanwhile, it was the dang manager who was the only person in the entire organization capable of putting together a reasonable response:

"It's uncalled for," said A.J. Hinch when asked about the actions of assistant GM Brandon Taubman.

No equivocation or misdirection from Hinch in his answer to the question.

Hinch shouldn't be be the only one to represent the Astros on this. Owner, GM should be, too. pic.twitter.com/NXHJPLWirb