Cubs Are Prepared to Assume the Risks That Come with Hiring David Ross ... And I Dig It Skip to content 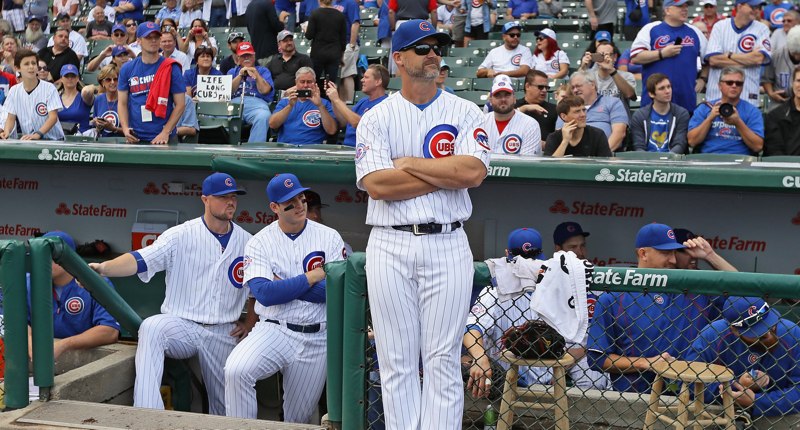 There’s a lot about the hiring of David Ross that we just aren’t going to know or understand or be able to evaluate for years. Going too deeply into the analysis of the merits on any managerial hire – especially a guy with close ties to the organization, but without any kind of track record – is kind of a silly endeavor, and I’ll leave it to others who want to take that leap.

Generally speaking, though, I’m pleased that the Cubs managed to land a young, energetic, recently-retired catcher, who is viewed as a strong leader, a strong communicator, and a strong collaborator with the front office. That’s basically the contours of what I wanted to see the Cubs do, particularly if the analytic inclinations are strong (which, given his time with the front office and the era in which he played, I suspect Ross’s are).

I get the sense, though, from reading all that’s out there – Twitter, comments, critical punditry – that many don’t see this as the right move by the Cubs. Some of that is undoubtedly just a little bit of “shiny new object” syndrome, given Joe Espada’s impressive candidacy and attachment to one of the most forward-thinking organizations in the game. But I know that some of it is a feeling like there’s a retrenchment by the front office at a time that calls for something totally different.

I’m thinking a lot about how the dynamics of this hire are so much different than we would have thought they’d be if we knew a few years ago that Ross was gonna get the job in late 2019. For as much as we would have thought then that it was a “feel good” hire, the reality now is anything but. As a matter of fact, given the climate surrounding the Cubs’ deep disappointment and organizational failings since 2016, bringing back “Grandpa Rossy” is as likely to evoke hostility from Cubs fans as positivity. Did you ever think the front office would be put on its heels by some, seeking to have them defend hiring David Ross?

But that’s where things are. Don’t get me wrong – I think that particular pushback is misguided, and really misunderstands who Ross is and what his development as a managerial candidate has been. I’m just saying that it’s so weird to see negativity out there, given Ross’s standing with the Cubs the last time he had on a jersey.

Let’s be really clear: this is not a “feel good” hire. This front office has no interest in anything whatsoever in the coming years beyond “win a lotta damn games,” and they know that bringing back Ross in this critical role at this critical time comes with particular risks. Risks that wouldn’t have existed with an outside hire like Joe Espada. They risk obvious, easy criticisms about looking backwards. About the winner’s curse. About handpicking a friend. About picking a guy with no managerial OR coaching experience. And yet, despite all that, this is still the guy they wanted.

Ross was the guy they wanted for a very long time, and nothing they learned in the past few weeks swayed them from that perspective. I don’t think the front office necessarily deserves grace on the selection just because of who they are; but the fact that they’re sticking with Ross, despite knowing all that needs to change? Knowing their own legacy and fate are going to be tied to this choice (to say nothing of Ross’s)? I think that all says something about their confidence in him as a manager, and about their ability to work with him in a synchronized way.

Whatever’s happened with the Cubs in the three years since Ross’s retirement, nothing’s changed in the belief in him as a future star manager (except for the fact that he got more experience seeing the game from new perspectives). Ross, who had a connection to this front office going back to its Boston days, and who was a vocal leader in numerous MLB stops, was seen as a future big league manager long before he even played for the Cubs. His connection now to the team and city no doubt is a factor in this process, but it’s not why he was selected, and anything that has happened with the Cubs certainly isn’t a reason he’s doomed to fail. It’s almost like some want to punish Ross as a candidate because of the Cubs’ struggles since he departed the dugout. That … doesn’t make any sense.

Who’s to say having him back isn’t exactly what the Cubs need? Not because his mere presence evokes memories of a happier time, but because his leadership ability helps the team succeed.

Let’s see how it plays out.

Some other bits and pieces I thought worth sharing before things become officially official:

Dynamic with Ross managing former #Cubs teammates will be fascinating. Ross is affable, but also can be brutally honest. Cubs thought Maddon shied away from tough conversations. By taking job, Ross is making a choice, knowing he might damage existing relationships in new role.

Why the Cubs and new manager David Ross are taking the leap together: https://t.co/s6zRViEvZx

I'm sure some of his philosophies changed in the last few years during retirement, but a lot of interesting management commentary in here.

Meanwhile, that same day in Cincinnati, Starlin Castro had a homer, triple & 6 RBI in his MLB debut for the #Cubs

David Ross will be the 4th #Cubs manager who also played for a Cubs #WorldSeries champion.

"He's my biggest mentor in this game other than, really, Joe." –Anthony Rizzo

"If it's Rossy, then I'm sure we'll butt heads just like I butted heads with Joe. But, at the same time, I would respect the hell out of him. He's my boss." –Jon Lester