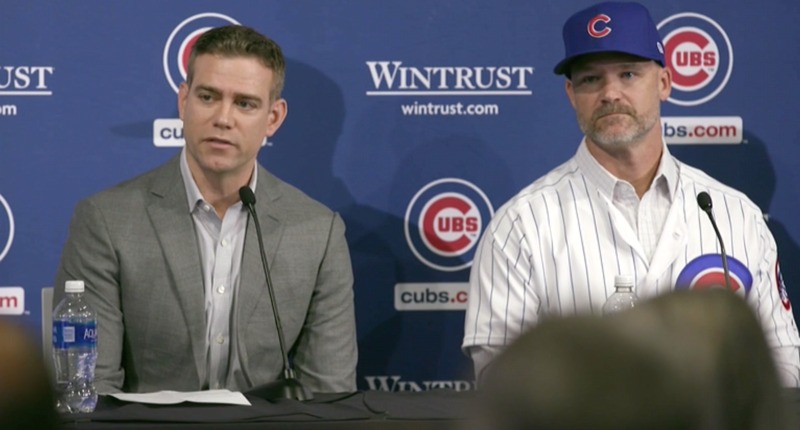 One of the good and obvious questions from today’s introductory press conference: hey, David Ross, what’re you gonna do with your coaching staff?

Appropriately, Ross deferred any meaningful comment on that until a later date, because nothing is ready to be finalized on that front. And, from Theo Epstein, it sounds like there are going to be some decisions and phone calls to make:

Theo said he and Ross will work through coaching staff decisions immediately. Plan is to retain some of last year's staff, but Ross has some people from the outside who Cubs may add to the fold.

The manager spot is both the most visible and most important job on the coaching staff, but let’s not sleep on how the Cubs might incrementally improve on that front. I wonder how much change we’ll see.

Here’s the current constitution of the coaching staff:

Thanks to the massive turnover on the coaching staff the last few years, there aren’t too many long-tenured guys here (Mike Borzello and Lester Strode are a couple of the exceptions, and I wouldn’t be surprised if they’re kept). Of course, tenure cuts both ways when it comes to retention: on the one hand, there’s not a lot of organizational attachment to certain guys when you’re changing the manager spot anyway; but on the other hand, there’s been SO much turnover that maybe you want to at least keep SOME institutional memory.

I tend to think that pitching and hitting coaches are safe, given that they were just brought in as the third set of coaches in three years, and were specifically targeted by this front office as guys perfect for those roles. Throw in the fact that, at an individual level, there was a lot to like about certain pitching and hitting performances this year, and I think Tommy Hottovy and Anthony Iapoce will be back.

Will Venable has been taking managerial interviews, but he’s still young and is another guy who was targeted by the front office. I bet they’re going to want to keep him.

I wonder what will happen with Mark Loretta, given the importance of the bench coach job for a rookie manager with so little experience like Ross. Loretta has tons of post-playing experience, but the majority has been in the front office. He may very well be a great fit for Ross, or it’s possible the front office (and Ross) will want to pair him with a very experienced former big league manager.

Elsewhere on the staff, we’ll see if that’s where the Cubs and Ross squeeze in a guy or two that Ross is looking at, specifically. You’d prefer him to be able to have some guys in the group that he would like to include, and frankly, it would be nice to get at least some guys in from another organization (or another level of the Cubs org).