Francisco Lindor Trade Rumors Are Kicking Up, and Eventually They'll Touch the Cubs One Way or Another Skip to content 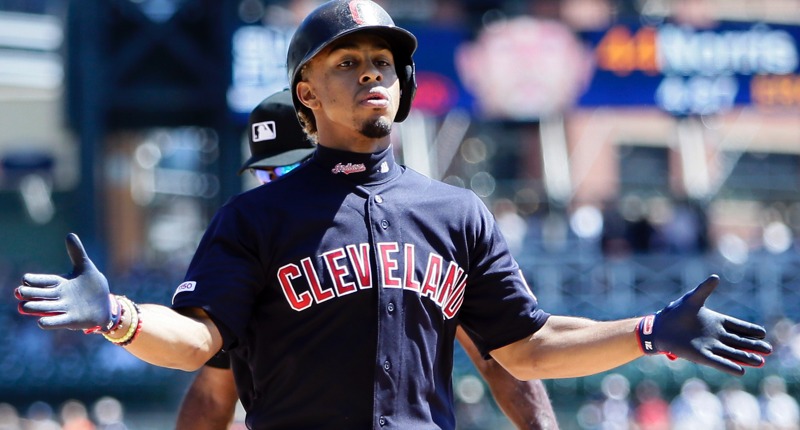 Take yourself back for a moment to the winter before the 2018 MLB season began: Guys like Yu Darvish, J.D. Martinez, Eric Hosmer, Jake Arrieta, and Shohei Ohtani led the free agent market, each eventually signing relatively large deals with their respective teams (though there’s an obvious asterisk there for IFA Ohtani).

Despite the presence of those – and still several other – big-name free agents, I’d argue that the juiciest offseason rumors revolved around the trade market, thanks to two players, in particular: Giancarlo Stanton and Manny Machado. Machado ultimately stuck with the Orioles for another half-season, but his name was bandied around often and loudly, as the potential impact of a Machado trade could have flipped the league on its side. And the same goes for Stanton, the 2017 NL MVP, who actually was traded to the New York Yankees before the winter was done.

The impact of just a couple young, legitimate star players being made available (with only one actually being traded) grabbed our attention all winter long, and significantly impacted the way the free agent market proceeded, too.

And this offseason, there could be as many as THREE of those types of trade pieces.

Indeed, we more or less already know that Kris Bryant (one or two years left, unlikely to extend with the Cubs), Mookie Betts (expensive final year as Red Sox look to get under the competitive balance tax threshold), and Francisco Lindor (getting pricey for the Indians, who will not be able to extend him under almost any realistic circumstance) are at least theoretically available. Each of those three players *easily* live up to the pre-offseason hype/talent levels of Machado and Stanton back before 2018 and all three might be on the block. That’s going to be something to behold as the offseason unfolds.

To that end, rumors about any of them could impact the others of them (and their teams), as well as the teams that consider pursuing.

Thus we discuss: According to rumors sourced by Jon Morosi (MLB.com), “many in the industry believe there is a good chance [Lindor] will be dealt before next Opening Day,” and “the Dodgers are expected to pursue a trade for” him this winter.

Both possibilities could have ramifications for the Cubs as soon as the offseason begins.

I am going to do the dreaming part first. I wouldn’t mind seeing the Cubs pursue Lindor, especially with second base open and the possibility of pairing Lindor with Javy Baez up the middle. And it might not be entirely unrealistic, given the Cubs’ improving farm system plus the expected price tag for Lindor, who is coming off a (relatively) down 2019 season.

According to Morosi, “it would be easy to foresee fellow backstop Keibert Ruiz” as a centerpiece in any deal for Lindor this winter. Ruiz is the 33rd best prospect in MLB according to MLB Pipeline and 3rd best catching prospect in baseball. Morosi also mentions shortstop Jeter Downs (87th in MLB) and right-hander Josiah Gray (75th) as possible trade chips in such a deal.

It’s not exactly apples-to-apples, but are catcher Miguel Amaya (90th ranked overall, 5th-8th best catching prospect), shortstop Nico Hoerner (47th), and left-hander Brailyn Marquez (will be on most lists later this offseason) not at least close to a similar comparison? Especially if you included a big league piece, too? I’d say so.

To be sure, I’m not suggesting trading any or all of them in a deal for Lindor – especially not as the Cubs just restocked the farm, but (1) if the tippy-top prospects are really not necessary in a deal for Lindor and (2) Lindor is truly available, then that’s absolutely the sort of deal this Cubs team should be willing to explore at almost any prospect cost.

Going after Lindor right now would be an EXTREME bet on this Cubs team to bounce back these next two years, but adding Lindor to the rest of the talent on the roster? That’d be a dang good looking lineup. Moreover, it’s not like Lindor is a mere rental and it’s at least possible that the added value of getting him in the door two years before he hits free agency could be a boon to the Cubs’ chances of wooing him in free agency two years down the line (or, ideally, even sooner with an extension).

OK, let’s set that part aside for a bit, because the reality is that acquiring Lindor right now is probably much less likely for the Cubs than several other teams, including the Dodgers.

But even aside from acquiring Lindor themselves, there are implications for the Cubs, vis à vis the Dodgers.

For example, Morosi suggests that Dodgers shortstop Corey Seager, 25, could, in turn, become available if the Dodgers did manage to add Lindor this winter. Seager has not lived up to either his 2016 (6.9 WAR) or 2017 (6.0 WAR) campaigns, but he did have a nice 2019 season (113 wRC+, 3.3 WAR) coming back from multiple injuries, he doesn’t strike out, he’s young, he’s solid defensively … he’s attractive. No doubt.

I find it difficult to imagine the Cubs and Dodgers getting together on a trade, but it’s isn’t impossible and Seager fits in quite well (1) positionally, (2) offensively, and (3) youthfully (so-to-speak). Like Lindor, he’d come with two years of team control, but wouldn’t cost nearly as much in trade.

Other potential implications of Lindor being on the move: (1) Indians might thereafter look to pick up a cost-controlled bat in exchange for an arm (something you could see the Cubs getting involved in), (2) although there isn’t positional overlap, teams with the kind of capital needed to acquire two years of Lindor might also be in the market to try to persuade the Cubs to move Bryant, and (3) it’s not like there aren’t a couple other NL Central teams that wouldn’t love to try to land Lindor, too.

Point here being: If Lindor is on the move this offseason, there are a number of ways the Cubs could (or even should) get involved or be touched upon, so any and all rumors including him need to be squarely in your sights.