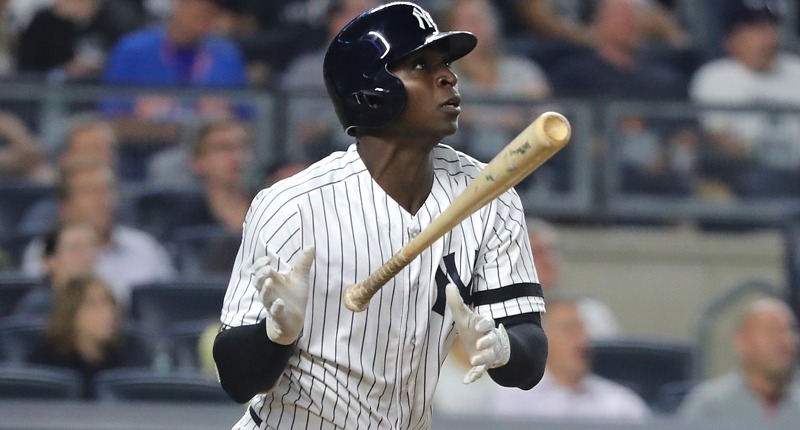 The 2020 Chicago Cubs roster has more than one hole, but among the most obvious, where the Cubs could also benefit from a short-term offensive upgrade, is at second base.

Of course, that’s nothing new. The Cubs had a hole at second base throughout the 2019 season, and that was WITH guys like Ben Zobrist (now a free agent), Addison Russell (strong non-tender candidate), Ian Happ (the bat showed up, but did the infield glove?), David Bote (never saw much time at second), and Daniel Descalso (terrible/injured) hanging around.

And before you ask about it, yes, I’m aware of Nico Hoerner and his potential future at second base. But he falls into a different basket of pre-season planning for now. While I do think the Cubs’ 2018 first-round pick will eventually (perhaps as soon as the middle of next season) carry a big-league caliber bat to match his big-league caliber everything else at second base, I just don’t think he’s there yet.

Throughout his MLB debut, Hoerner pulled the ball (41.2%) on the ground (52.9%) way too often and without making almost any hard contact (26.5%). And while it wasn’t a huge sample, it was exactly what we thought might happen to an extremely talented bat-to-ball type hitter, who hasn’t quite learned how to be selectively aggressive enough to tap fully into his power (think Albert Almora and Starlin Castro). Making contact is good, making contact at the expense of being a well-rounded hitter is not. Bryan dug into this potential issue for Hoerner earlier this offseason.

I don’t want to go too far off on a tangent here, but remember that Hoerner played in just 89 TOTAL games before his emergency promotion this past season, none of which came at the Triple-A level. I fully believe in his abilities and do think he’ll learn to control the zone better, hit the ball in the air with authority, and ultimately for more power – probably before the sun sets on the 2020 season – but I also think he’ll have to begin/continue that process at Triple-A Iowa to start.

Which brings us back to that big league hole at second base.

One way to address that need, of course, is free agency. Notably, unlike third base (Anthony Rendon), right field (Nicholas Castellanos), or starting pitcher (Gerrit Cole), there isn’t really an obvious top-shelf second baseman available on the free agent market. Moreover, with Hoerner potentially seen as the talented, affordable, and contractually-controlled second baseman of the future anyway, a big, long-term free agent investment at the position probably doesn’t make that much sense.

But how about a low-cost, high-upside, medium-term play that could buy Hoerner time while still giving the Cubs a chance to take back what should be a winnable division in the meantime? That’s something I could and want to see.

A couple options to consider …

During that All-Star season, Gennett hit .310/.357/.490 (125 wRC+) with positive defense at second base and ultimately a career-high 4.5 WAR. The year prior, 2017, Gennett’s defense wasn’t as highly rated, but his overall offense production was certainly up-to-par (123 wRC+), and he hit a career-high 27 home runs. Historically, he’s not a high strikeout guy, either, posting strikeout rates around league average or better until last season.

But, yeah, about last season. Gennett began 2019 on the injured list with a severely strained groin, which kept him off the field until the end of June. After a rough re-entry to the league (25 wRC+ through 72 plate appearances), the Reds cut bait and traded him to the Giants for a player to be named later. The Giants stuck with Gennett for only 67 plate appearances (66 wRC+), before releasing him less than a month later.

So why would I even want him? Well, for one, he was pretty great for all of 2017 and 2018, and has three very good excuses for a poor performance in 2019: the injury, the ridiculously small sample, the cross-country trade. Based on that alone, I’d be fine betting on a bounce back. Throw in the fact that he’s likely to cost very little to sign and there’s really not that much to dislike as an upside bridge to Hoerner.

I’ll also add that while the production wasn’t there in 2019, his peripherals weren’t all that bad. Gennett’s line drive rate and ground ball rate were more or less in line with his best years, his infield fly ball rate shrunk to a career-best 3.3%, and he actually made less soft contact than ever (though there was a lot more more medium contact and strikeouts).

Indeed, Gennett’s primary problem last season seems to be an antsy approach at the plate that led to more swings out of the zone and more whiffs in the zone – but for a guy coming back from injury and battling to save his spot on two teams (and in a small sample) that’s not unexpected. With an offseason to rest from the injury and a little more certainty – at least to start the year – a 29-year-old Gennett is a fine person on which to gamble.

If Gregorius is forced to settle for a contract that pays him more for his performance in 2019 (and out of fear of his injury recovery) than it does for what he did in 2017 and 2018, the Cubs could do a WHOLE lot worse for their buck. He’s got power, he doesn’t strike out, and if he was forced to second base by Javy Baez, his already solid glove-work should play up.

Now, of course, neither Didi nor Scooter (#Names) are sure-fire answers to the Cubs second base hole, but that’s also kind of the point. They can both handle the position, buying time for Hoerner, while providing some legitimate upside given their age, recent track-record of success, and understandably down 2019 seasons.

Perhaps this sort of deal wouldn’t be the sexiest move the Cubs could make, but it would be a whole lot better than sitting on their hands and hoping for the best with internal options.