The offseason is here, options decisions are complete, and qualifying offers have been issued. That means, until the tender deadline on December 2, you won’t necessarily see wide scale chopping or adding of salary around the league on any one particular day. It’ll just be, you know, as the offseason proceeds.

So, then, it feels like the right day to set up the Cubs’ baseline payroll for 2020 heading into this offseason. We know that a lot of contracts are rolling off the books, and we also know that a lot of guys are getting big raises – but where do things actually stand?

Here’s the chart, broken down by player category and type of payroll (actual dollars and dollars for the purposes of the luxury tax, which are calculated differently), which includes arbitration estimates from MLBTR: 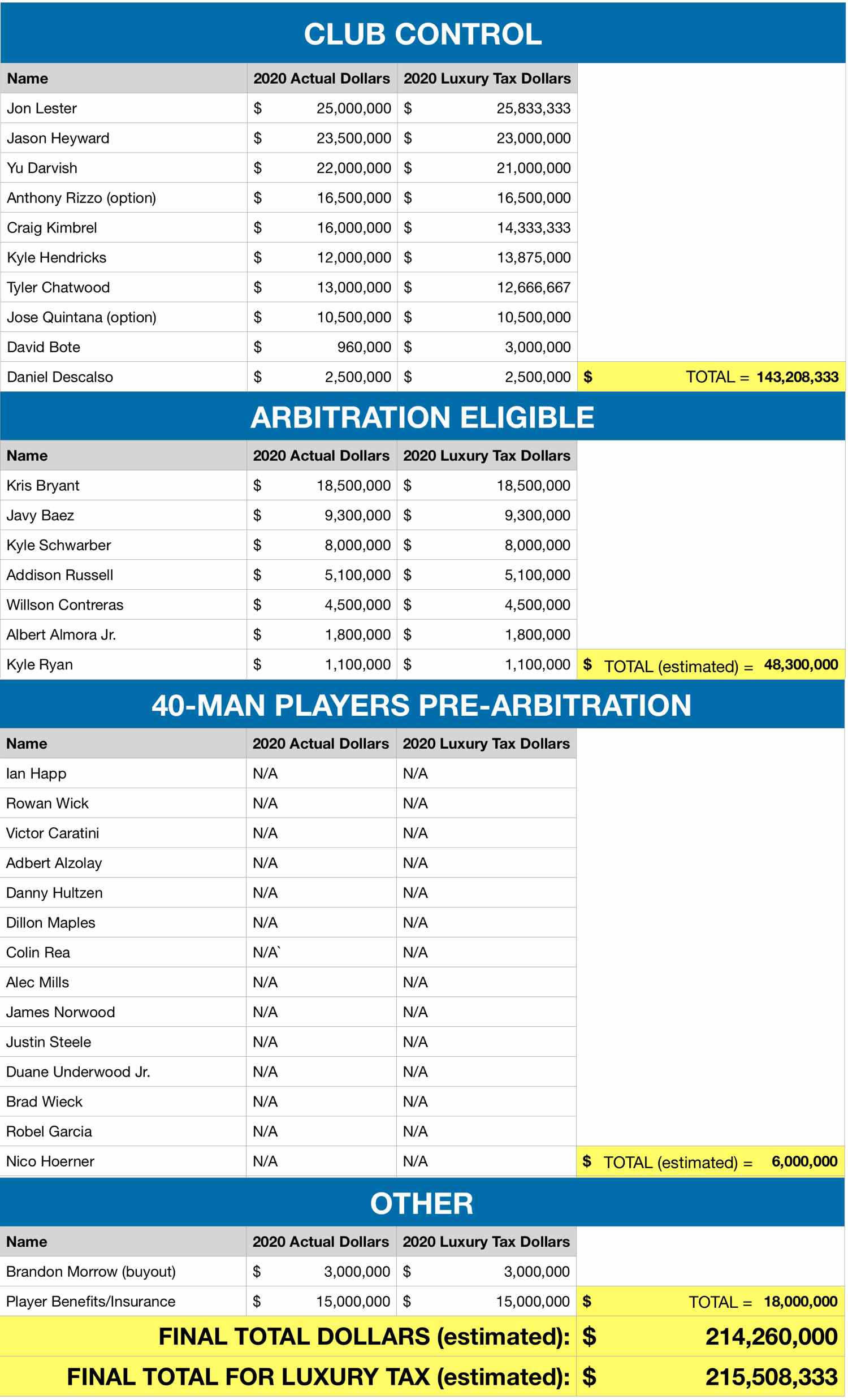 *Note: the luxury tax payroll – sometimes called CBT payroll – is not the *only* thing that matters, as the actual amount a team outlays in a given year matters a great deal, too. But for our purposes today, since so many major market teams’ spending is dictated by where they are relative to the luxury tax tiers, and since the actual and luxury tax figures are very close for the Cubs in any case, we’re sticking with that one for our discussion. Oh, also: thanks for making the chart, Michael!

Last year, the Cubs’ final payroll for luxury tax purposes wound up just about $233.8 million, taking them well over the luxury tax line ($206 million), and over the second tier of the luxury tax ($226 million), which cost them a little extra tax money. Their figure was the third highest in baseball, behind only the Red Sox ($239.5 million) and Yankees ($233.9 million), per the AP.

That is to say, the Cubs certainly spent aggressively last year, even as they wound up without a division or a postseason appearance to show for it.

We’ve been given no indication that the Cubs intend to expand their spending this upcoming season, so I wouldn’t project it (even though I’ll continue to caution you that you can’t always tell what the Cubs plan to do based on their public comments poo-poo’ing spending). That is to say, leaving in $10 million for midseason acquisitions, you probably wouldn’t project the Cubs to go into next year with a luxury tax payroll over $224 million.

If the Cubs capped themselves at $224 million heading into the season, that would mean they’ve only got about $8.5 million worth of spending space right now. Forget about dreaming on Gerrit Cole or Anthony Rendon – you’re gonna have to dream on them being able to land Drew Pomeranz and Gio Gonzalez!

OK, but let’s take a step back. The Cubs are expected to turn over considerable portions of their roster this offseason, so it’s extraordinarily unlikely that they’re just gonna be adding pieces to that group above. Indeed, if they did that with only $8.5 million of flexibility, the offseason would be a disaster.

One thing the Cubs are extremely likely to do is either trade or non-tender Addison Russell. Even if he’s still got upside, he hasn’t shown signs of being a quality big league regular in three years now – to say nothing of his domestic violence suspension and mid-season demotion to work on focus – and I can’t imagine the Cubs are going to commit $5+ million to him at this point.

The Cubs might also decide to move on from Albert Almora – trading for another stalled-out, change-of-scenery type? – which could save another $2-ish million.

I also still think that Kyle Schwarber’s ultimate contract comes in shy of that arbitration projection – maybe another $2 million there.

That is all to say, even before we start talking about bigger, crazier possibilities (like trading Jose Quintana or Tyler Chatwood, or trading Kris Bryant), that $8.5 million buffer might get another $10 million.

Of course, on the flip side, you can pretty easily see how, if the Cubs were intent on getting under next year’s $208 million initial tier of the luxury tax, they’d have to aggressively cut to make that happen, even if I were right about that $10 million, unless they plan to make zero additions whatsoever. (That is not the plan.)

As the offseason goes along, we’ll continue to get a better sense for what the Cubs are angling to do. But this is the payroll baseline off of which you should be mentally working. Sorry that it’s already rather robust, but that’s what happens when many of the biggest contract signings don’t quite go the way the front office was projecting at the same time the “younger” guys all start to get really expensive.