How About This Trade Target for the Cubs? Rockies Righty Jon Gray Skip to content 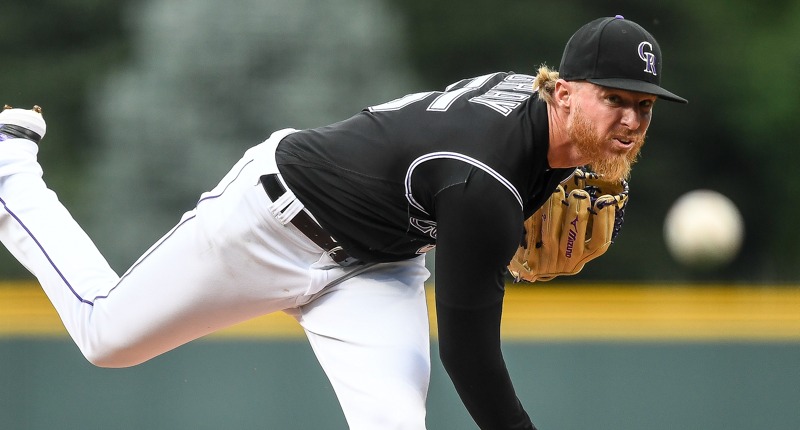 The Cubs have been frustrating to watch over these last two seasons – Breaking News! – but the flaws run much deeper than the performance at the big league level. In fact, the competitive, upward momentum of the organization has all but stopped, as the front office has failed to do lately what they used to do with somewhat shocking consistency – i.e. add an ascending player (from outside of free agency), who hasn’t quite figured it all out yet with his current team, and then becomes impactful.

Remember, it’s worked to the extreme with guys like Anthony Rizzo, Jake Arrieta, and Pedro Strop – and to a lesser extent with someone like Dexter Fowler (he was already pretty good) – but that’s what the Cubs have been missing in recent years. Now, obviously those deals are hard to come by/easier said than done, but I don’t come empty-handed in a post like this.

In fact, I come bearing a specific name to consider, one that should be pretty familiar to many Cubs fans: Jon Gray.

Take yourself back to the night of the 2013 MLB Draft – our live coverage is right here.

The Cubs were sitting with the second overall pick behind the Houston Astros and ahead of the Rockies with Mark Appel, Kris Bryant, and Jon Gray atop most projections – in almost any order. In fact, just moments before the draft started, Jim Callis guessed it would go Gray (Astros) – Appel (Cubs) – Bryant (Rockies). Thank goodness it did not.

The Astros wound up taking Appel first overall (oops), and the Cubs, who had been long-connected to Appel, decided to swerve at the last minute for Bryant instead of taking the other pitcher, Gray, as expected.

There’s no disappointment here, as Bryant is a legit top pick, and there were a lot of risks with Gray. I suspect the Cubs wanted Appel, and they simply couldn’t get him.

The Rockies ended up taking Jonathan Gray, so the top three prospects went in the top three picks, even if the order was wonky. The Cubs certainly got the safest of the three top picks, and one with arguably as much upside as Gray.

Point here being, the Cubs are probably intimately familiar with Gray from their time scouting him as a potential first-round pick. He was thought to have the most upside at the time, but possibly also the most risk.

And that brings us back to the present.

In 2019, the Colorado Rockies (71-91) finished the season in fourth place of the NL West, despite a franchise record-setting $145M payroll. And unfortunately for them, their payroll in 2020 is already projected at upwards of $160M, without accounting for any external additions or improvements. Combine that financially-paralyzing truth with the presence of the still-dominant Dodgers, the re-tooling Giants, the surprisingly-competitive Diamondbacks, and the obviously up-swinging Padres in the West, and it’s not a great time to be bet on the Rockies, to say the least.

So what does that mean for Gray? Well, as MLB Trade Rumors posits, his time in Colorado may be up.

Gray, 28, is under control for two more seasons (via arbitration) and is projected to earn nearly $6M in salary next season. So if the Rockies wanted to save a little money and maximize his value, trading him this offseason could be the ticket.

And that’s where the Cubs come in.

With Cole Hamels gone (via free agency), Jose Quintana not living up to expectations, and Jon Lester’s pesky aging, the Cubs need to find a way to add an impact starting pitcher this offseason, and it might not come from free agency.

Thus, Gray could be a pretty good, familiar, high-upside starter to target.

Of course, that’s not to say he’s necessarily been consistent, because he has not – in both the performance and health departments:

*Gray missed the final month of the 2019 season following surgery to repair a stress fracture in his left foot, though he’s expected to have a normal offseason.

Seeing those numbers laid out, I think it’s pretty easy to see that Gray has flashed his ability to be an impactful starting pitcher – in Colorado, no less – while also demonstrating why the Rockies haven’t felt pressured to extend him for the long-term. Either way, there’s promise there, and I’d love for the Cubs to take a bite.

But it’s not just that Gray (1) could be available, (2) is not making a ton in salary, (3) has flashed dominance in the past, (4) should be somewhat familiar to this front office, and (5) could stand to benefit from leaving Colorado, as most pitchers do. It’s also about the type of pitcher he has become.

The front office has shown a renewed dedication to improving the pure stuff and velocity of this pitching staff, and Gray, with his 96 MPH fastball and plus-plus slider, fits the bill perfectly.

Among all starters with at least 150 IP in 2019, Gray’s slider had a pitch-value of 13.6 – that’s 10th best in baseball, one spot ahead of Gerrit Cole’s slider (13.0). I’m obviously not here saying Gray is the next coming of Cole, but he certainly has the sort of stuff pitching coaches love to get their hands on.

So ultimately all I’m saying is this: If Gray is made available this offseason, I really hope the Cubs strongly consider a play for him. He’s exactly the type of pitcher they should be targeting and this is exactly the sort of deal that fueled the early half of this competitive window.

Could the Cubs and Rockies find a fit where the Cubs send a younger, cost-controlled position player along for Gray? Some prospects, too? It seems a bit early to speculate specifically on what the Rockies might want, but I do think it’s fair to surmise that there could be a reasonable enough fit between the teams that this is not an unrealistic target to start thinking about.

Of course, that said, if Gray is made available, there would likely be many, many teams inquiring, and perhaps the Rockies would prefer to pick up some longer-term, high-upside prospects in a deal instead. That may not be where the Cubs are looking to trade.

In any case, this is to get you thinking about creative moves the Cubs can make to improve their team for 2020, even if they aren’t planning to go spend-crazy.