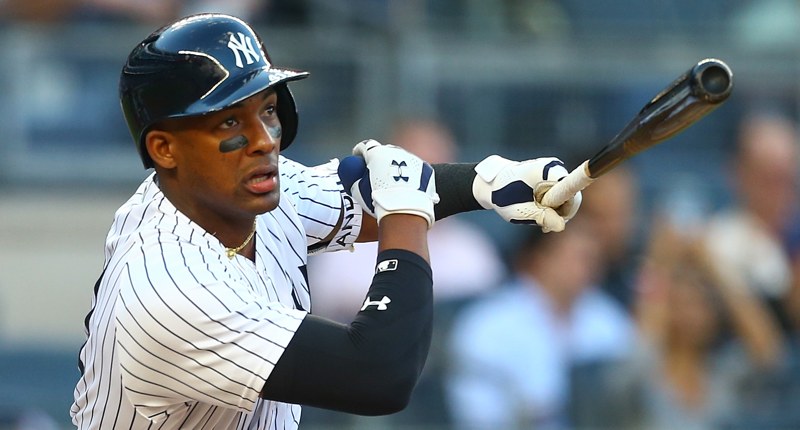 We know that the Chicago Cubs may get very creative with their trade considerations this offseason, so I’m much less inclined to throw away an out-of-market trade suggestion without at least discussing it for a moment.

Today’s edition comes from John Harper at SNY, where he is ruminating on the possible deals for Yankees third baseman Miguel Andujar, whom the Yankees may look to use as a chip to fill other holes on the roster. Because Andujar was usurped at third base in 2019 by Gio Urshela while Andujar rehabbed from surgery, the Yankees might view Andujar as something of a free trade chip.

Among Harper’s four trade suggestions? Andujar to the Cubs for Kyle Schwarber, a former Yankees trade target and a much-desired lefty bat for their lineup.

It wasn’t but a year ago that Andujar’s stock couldn’t have been much higher. The then-23-year-old third baseman was posting a .297/.328/.527 slash line with a mere 16.0% strikeout rate to go with a 36.0% hard contact rate, and his status as one of the better-projected offensive prospects in the game seemed to have been borne out. His 130 wRC+ might’ve been only a starting point for the years ahead.

But then 2019 happened, and with it, a serious right shoulder injury (labrum), which not only wrecked his year, but also ultimately required season-ending surgery in May. What he will be going forward is somewhat of an open question, because now he will have to deal not only with the adjustments that come after initial success in the big leagues, but also while coming back from a serious injury (interestingly sounds a lot like Schwarber in that regard).

There is also the defensive question. Andujar rated among the worst defensive players in the league in 2018, and posted one of the worst third base seasons of all-time by the defensive metrics. He is probably not long for the position, and it’s fair to have questions about how he would transition to the outfield.

So there’s your question about why this trade would work for the Cubs. Yes, financially, they’d be swapping a couple more expensive arbitration years of Schwarber for four cost-controlled years of Andujar. And maybe you could even convince yourself that Andujar’s offensive upside is even more significant than Schwarber’s (and he comes with a higher contact rate, too).

But the risk element of a trade like this? Whoo buddy. There’s a ton of it. The downside risk is that Andujar cannot play anywhere with competent defense, and his offensive recalibration post-surgery is a mess. You could wind up with four cost-controlled years of bad.

Worse, you might’ve given up two of the best years of Schwarber’s career. The guy he was last year, particularly in the second half – a guy the Cubs believe is the real Kyle Schwarber – can carry an offense. That could be a nasty, nasty thing to give up.

Still, I do get the theory behind it (even if the writer is providing only the New York perspective). The Cubs don’t have any huge, impact bats coming in the next two years (Nico Hoerner is more of a steady bat than a truly impactful one), and if they wanted to find one still in his pre-arb years, it would have to come with a lot of risk.

All that said, I’m not sure Andujar is the guy the Cubs would target in a deal like this, unless they were absolutely in love with his bat and felt like he could transition – for example – to left field and play serviceable defense. I highly doubt the Cubs would acquire him to be their new third baseman, even in a world where they’ve parted with Kris Bryant.