This is part 3 of a 4-part series on the decisions the Cubs need to make this week regarding Rule 5 eligible prospects. Part 1 is here. Part 2 is here.

As the Cubs weigh the decision about whether to protect Zack Short from the Rule 5 Draft, it’s weird, I imagine the conversation quickly strays from Zack himself. It’s not about Zack’s defense, the role his broken hand played in lower-than-expected power numbers, or how he performed in the Arizona Fall League.

Instead, it’s a conversation about position scarcity, about the Cubs needs up the middle, and about who else the Cubs would have to fill them. More than any other player in this process, I find Short’s case to be impossibly intertwined with the context that surrounds it.

Consider just a few of the things that we can’t know right now, that the front office likely has plotted out. They know whether or not Addison Russell will be non-tendered in early December. They know, with far more certainty than the small-sample size available numbers, what David Bote and Tony Kemp project at defensively as emergency back-up shortstops. They know their free agent plans as it relates to middle infielders.

What we know is that Short is also competing for pole position on the I-80 Des Moines Express with a couple of other homegrown Cubs middle infield prospects: Vimael Machin and Trent Giambrone.

This is where internal evaluations have to be spot on. Is one of these three markedly better than the other? I’ve spent some time redoing my own scouting reports for these three, and I thought it would be informative to rank them in four categories: on-base ability (my version of hit tool that includes patience), power upside, defensive skills and bench player utility.

This is where Machin absolutely thrives as the best walk-to-strikeout hitter in the Cubs system. Machin’s hit chart from 2019 (courtesy Baseball Savant) is an absolute thing of beauty: 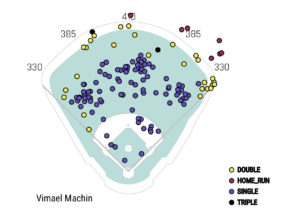 As a lefty hitter, you get a feel for the power skewing to the pull side, but he’s still absolutely capable of knocking a pitch in any part of the zone to any part of the field. While Machin was hurt by bad BABIP luck in 2018, a season in which he began elevating the ball much more, the balls in play luck rebounded in 2019 despite even more fly balls. The good news is that when Machin filled in with Iowa, he remained the same player, taking a boatload of walks and making loads of contact.

I ranked Short second here, and that’s all about his ability to draw walks. Seeing Short head to the Arizona Fall League and not feel the urgency to get away from his core competency was really encouraging. He’s someone very comfortable getting deep into counts, and adept at seeing spin.

The problem is that his swing and miss increases when he sees better pitching, and his plate approach is just too simple.

I docked Giambrone to the third spot, because I believe the juiced ball led him to be way too homer happy in 2019. Once a pretty solid contact hitter, Giambrone’s K rate shot to 27.4% with Iowa, and I believe it’s likely to stay there. Unlike Short, he doesn’t match this with a particularly patient approach, so lower on-base percentages would be expected.

This is really clear cut, and I love how perfectly it’s represented by their average estimated fly ball distance from last year (per Minor Graphs at Prospects Live):

What I love about Giambrone is the simplicity of his power. I wrote about that part of his game in April, but the video does the talking here:

The good news is that there’s no butcher here. Short is easily the best, the only one of the three who could handle a full-time assignment at shortstop. I find that his range is pretty good for the position.

A run scored on the play, but #Cubs No. 9 prospect Zack Short made a heckuva play to just get one here ⁦@MLBazFallLeague⁩ pic.twitter.com/mvLfxZCYd6

I have Machin second, because I find he plays a pretty good second base. He did the eight-position gimmick for Tennessee this year, but still has very limited outfield experience. He doesn’t have the arm to be a real option at third base.

Giambrone’s best asset in the field is that he’s very fundamentally sound and rarely messes up. He’s taken to the outfield well, although his arm doesn’t profile as an asset there. He’s capable at all infield positions, though his range will not blow your socks off. He’s fine.

Rank: Giambrone first and then the Eye of the Beholder

In this category, I’m looking for someone who can fill a variety of small roles for their manager. That’s Giambrone. He’s the fastest of the three players, with 48 steals in 62 attempts over the last two seasons. He has the most experience at a wide variety of positions. Once an awkward reverse-split hitter, Giambrone’s troubles against lefties vanished in 2019, as he hit 12 of his 23 homers against southpaws in less than half the plate appearances.

It was sort of impossible for me to decide between Short and Machin here, as it really depends on the roster.

Short would fit on a Major League roster because he’d provide a capable back-up ability at shortstop. He’s more athletic than Machin, though neither is a particular threat on the basepaths. Short began playing second base in 2019, but I think would be a fine fit at other positions, including even potentially center, if necessary. I hoped he’d play there in Arizona.

Short has previously been known for his ability to bash left-handed pitching, though that skill did not transfer to Triple-A. He really struggled with Pacific Coast League lefties, striking out 41.7% of the time. I still believe that Short could serve as a soft-side platoon shortstop, but he now needs to prove that more.

Machin is a more traditional bench player, someone who wouldn’t be overwhelmed in a pinch hitting role against hard-throwing relievers. His contact ability probably best fits the current Cubs roster. He’s someone you could double-switch into almost any position. He would be able to pinch run capably, though that would be unlikely to yield a huge reward. Against lefties, Machin is reduced to slap hitting, while his power approach emerges more against righties. Though it’s also worth mentioning that Machin has by far the least high-level experience.

Ultimately, I don’t think Short has a big enough advantage over Machin and Giambrone to warrant giving him a 40-man roster spot right now. I think you bank that it’s very unlikely more than one of the three gets drafted (if even one does), and the presence of the other two protects you against the potential loss of one. The Cubs sure have done a nice job with college infielders in the draft’s middle-to-late rounds.