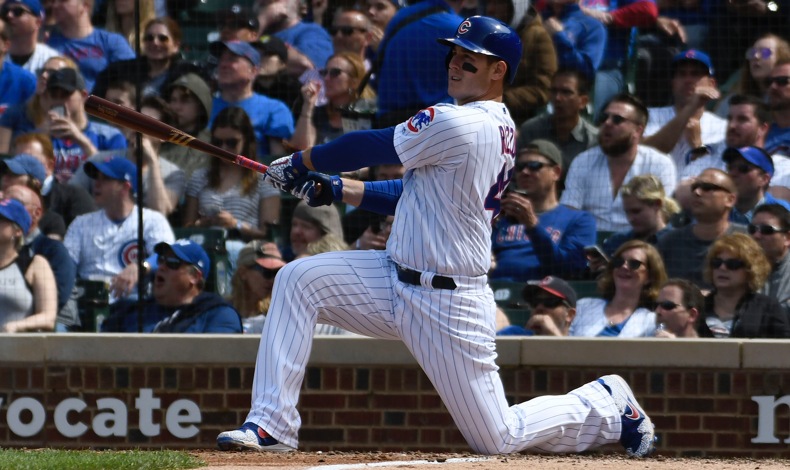 Thanks to comments from Anthony Rizzo’s agent to ESPN today, a lotta folks were talking about an extension for Anthony Rizzo, even though he wasn’t necessarily expected to be the first Cub approached this offseason about a deal – he’s a little older than a guy like Javy Baez, and he’s under contract via options rather than up for negotiation in arbitration.

But the way Rizzo’s agent made it sound, his camp wanted to get a deal done with the Cubs now – hey, who doesn’t want Rizzo to be a Cub for life? – and the Cubs were flatly uninterested in a conversation at this time (ESPN): “The Cubs have informed us that they will not be offering Anthony an extension at this time,” Rizzo’s agent, Marc Pollack, said from the winter meetings. “Anthony has let his desire to be a Cub for life known to the organization. Although we do not know what the future holds, a deal to make that happen will not be addressed now.”

Well, it perhaps read a little hard to Cubs GM Jed Hoyer, too, who responded with a statement to Dave Kaplan:

Cubs GM Jed Hoyer responding to @SportsTalkCHI on @NBCSChicago to the news from @ARizzo44’s camp about the lack of contract extension talks: pic.twitter.com/KegJu6NDdc 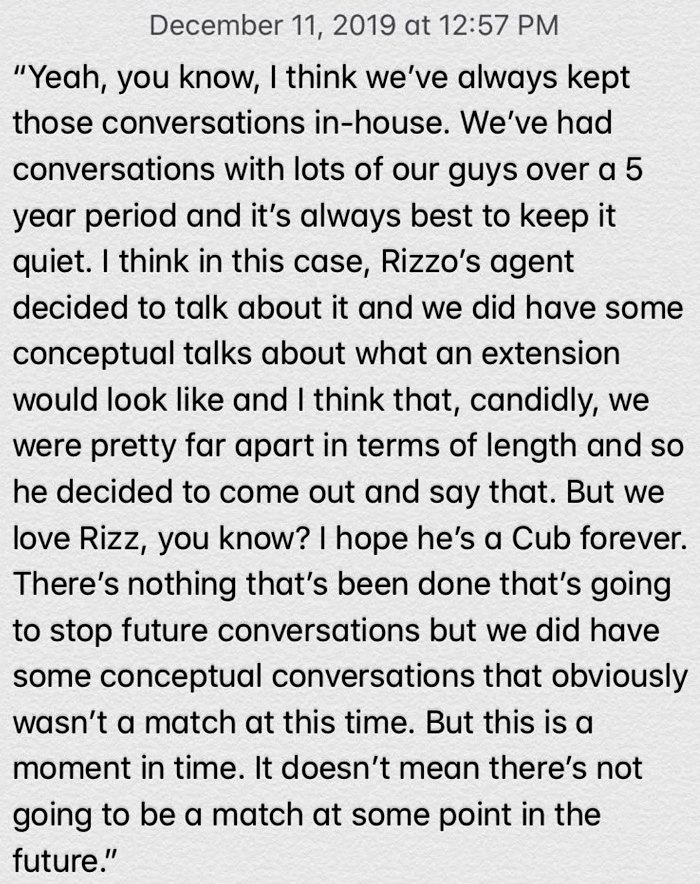 In other words, Hoyer is indicating that the Cubs and Rizzo’s camp did have extension conversations, but it was clear they were too far apart right now to realistically get a deal done … and then Rizzo’s agent put out a statement. I don’t really have a problem with an agent working for his client, especially when it’s a guy who just wants to be a Cub for life – and fans want that, too. But, in turn, I also don’t have a problem with Hoyer adding a little more information to clarify how things actually proceeded.

Like I said this morning: I expect other extension talks to proceed right now and up through the arbitration talks next month. After that, and maybe at some point next year, the Cubs and Rizzo’s camp can re-engage on extension talks to see if the gulf between the ask and the offer has shrunk.

Interesting that Hoyer specifically said “length,” as opposed to dollars. Just him talking off the cuff and it was actually both (which is what you’d expect)? Or was the ask for a super, duper long contract or something?

Fair to wonder, by the way, if Paul Goldschmidt’s extension with the Cardinals at a similar age (five years and $130 million) is the baseline off of which Rizzo’s agent is working, and then going from there. Would be pretty understandable.