Getting Cubs Pitching Prospect Adbert Alzolay Over the Final Hurdle, and Determining His Role Skip to content 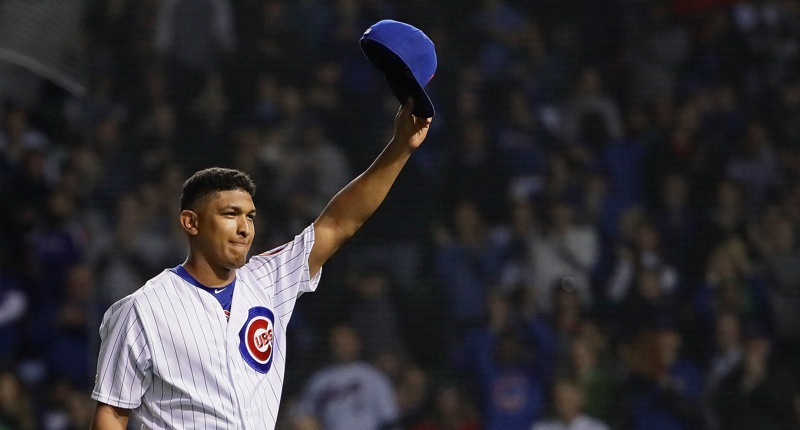 Without question, one of the highlights of the 2019 season was June 20, when Adbert Alzolay dazzled for four innings in his Major League debut. For a brief moment in time, it seemed like that long-awaited homegrown pitcher had been found.

It even gave us some in-season joy and hilarity:

And then, as was apropos for the 2019 Cubs season, it all came crashing down 11 days later in Pittsburgh, where he may or may not have been tipping pitches, but either way got totally blown up.

Alzolay’s season never quite recovered, as he’d hit the IL two weeks later with a biceps injury, before making six short starts in Iowa during August. The Cubs shut him down after just one relief appearance in September, ending his season with 81.2 innings. This comes after 39.2 innings in a 2018 season that was foiled by a lat injury.

So we arrive into 2019 with a really similar question that we had one year ago: how much longer can hope survive that Alzolay could be a starting pitcher? Tony Andracki at NBC Sports Chicago covered this subject yesterday, with Jed Hoyer at least suggesting there’s more fluidity in Alzolay’s role than there’s been in the past: “I have no doubt that he can contribute to our team next year. In what role, I don’t know yet. But I think roles are a little bit more fluid in baseball now pitching-wise. It could be as a reliever, starter, multi-inning reliever – who knows.”

Alzolay is down to one minor league option remaining, so if we assume that will be used up in 2020 (meaning he spends at least 20 days in the minors), he would enter 2021 without the ability of being sent to Iowa. By then, the Cubs will want to have all questions answered about Alzolay’s standing in the organization. Does he belong in the big leagues? And, if so, in what role?

(This, by the way, is why I have wondered if Alzolay might be the most likely prospect to be traded if the Cubs make one of those trades this winter. If they see him trending towards reliever, but another organization values him as a starter, that disparate value might benefit the Cubs in a trade. Your mileage may vary on that logic.)

It’s also true that Alzolay’s development is not done yet. He showed enough stuff in his big league cups of coffee that I have faith Alzolay can have success as a Major League pitcher. His changeup, for instance, was never better than in Chicago. It was, per FanGraphs, the 37th most valuable changeup in baseball on a per-pitch basis, among pitchers with 10 MLB innings or more.

What confuses me, and I think will be coaches’ greatest point of focus this spring, was that his curveball didn’t play in the Majors like I thought it would. Alzolay can spin a curveball north of 3000 RPM – the elite number – but we didn’t see a ton of this with Chicago:

I think about Adbert Alzolay’s curveballs from this one start a lot. pic.twitter.com/wNhH81Tadg

The specific outing in that video, May 27 against New Orleans, was the best Alzolay’s curveball looked all season. Jason McLeod and Theo Epstein talked about watching it during amateur draft preparation, and I think it’s a big reason why Alzolay’s 32.3 K% in Iowa in 2019 was the highest number he posted at any stop in his minor league career by eight percent.

You wonder why that seemed to go away in the big leagues, and of course, you wonder if it had to do with any of the injuries or lack of innings build-up in years past.

Even if injuries/endurance had nothing to do with it, the curveball still needs work. When Alzolay gets into the Pitch Lab this spring, I think the question will be how to optimize the curveball for more consistency and more depth. Per Brooks Baseball, Alzolay’s curve had 2.3 inches of vertical movement, which is not a good number. In fact, 78% of Major League right-handed pitchers have more drop on their curveballs.

The question the big league coaches will have to answer is how to turn Alzolay’s ability to spin into more success. Baseball Savant gives us this chart, which tells us the “active spin” of each of his pitches. Think of this as an efficiency number, and you’ll see how Alzolay’s curve lags behind: 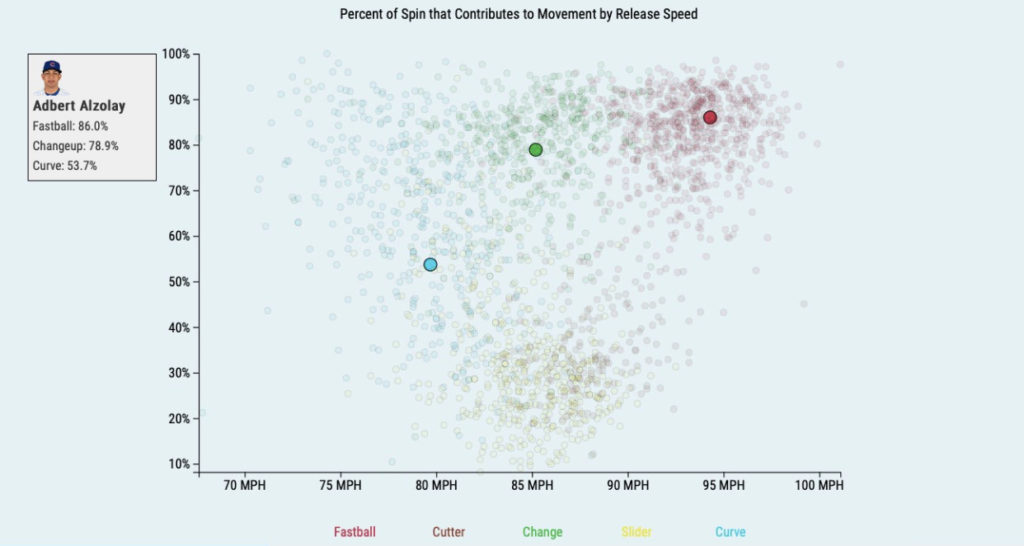 If that puzzle can be solved, and Alzolay’s curve can be the out pitch I believe it can be, his Major League upside is significant, thanks to the changeup and the excellent four-seamer. He can be a late-inning reliever, and I’m also intrigued by his potential as a multi-inning opener. But with a plus curveball in the mix, I also think the starter potential still remains (the question would be endurance). More from Jed Hoyer to Tony Andracki:

“We see him as a guy who can do both,” Hoyer said last month. “He can certainly be a starter, but also has an ability with his stuff ticking up out of the bullpen to be a guy that can lock down important innings in the bullpen. We’re unclear right now what role we’ll have him in. We’ll have those discussions with him this winter, but we’re totally comfortable with him doing either one.”

The Cubs are right to enter 2020 not ready to put Alzolay into a specific box. But the clock is on everybody involved – the front office, the coaches, and Alzolay himself – to get things locked down. Big year ahead.